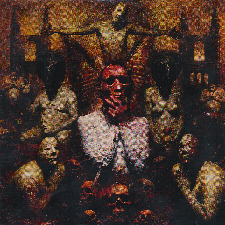 Arguably their best release in years

Vader are a band who are likely to need no introduction. They have been at the forefront of both the Polish and international death metal scene for 20 years. I have been familiar with the band since their second full length album De Profundis and since that time I have been equally frustrated and impressed by the band. Impressed by their speed and intensity, and frustrated by their general lack of musical development.

With the untimely death of drummer Krzysztof 'Doc' Raczkowski in 2005 I wondered what the future would hold for the band, but after hearing the Art Of War EP earlier this year it was clear that Vader had lost none of their intensity.

The first surprise that Impressions In Blood holds is the first track which consists of 40 seconds of symphonic material. This is an extremely uncharacteristic move, but it works well and serves as a strong introduction to the album. When the first 'real' track begins we are back into somewhat familiar territory, though in fairness it isn't the hyperblast that many would expect, but rather a mid paced melodic riff we are greeted with. By the turning point of the first minute we really venture into previously charted waters with the trademark Vader sound.

At this point you are likely to hit a fork in the road. If you love what Vader have been doing for the past two decades then you are going to love what is on offer here. If you have grown tired of the seeming repetitiveness of the band then you may end up a little disappointed.

Before hearing this album I had lost a lot of interest in hearing any new material from Vader. I found that there was little to no development in their writing and felt that I was pretty much hearing the same album over and over again, and preferred to listen to De Profundis or Black To The Blind. In a sense that is still the case with Impressions In Blood but something about this album keeps drawing me in.

Even after 20 years of making our eardrums bleed, they have lost none of their energy or intensity and have perhaps reached a point where they have perfected their trademark sound. They are unlikely to ever be a band that experiments greatly, but to their credit they have integrated a few new ideas into this album such as the use of orchestration in places and some tribal inspired drumming at the end of the song Field Of Heads.

I would encourage any prior fans of the band to give this album a chance because, as someone who had lost all faith in the band, my interest has been rekindled with Impressions In Blood.