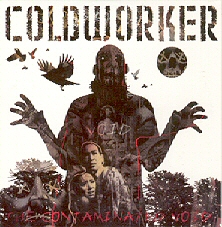 It took a year after the demise of Swedish (Ã–rebro based) grindcore act Nasum (Due to the untimely death of vocalist/guitarist Mieszko Talarczyk, who was a victim of the tsunami disaster that took place in Asia in December 2004) for drummer Anders Jakobson to find the inspiration to put together another band, but within a short six months, he's returned to the drum stool within a group formed under the moniker of Coldworker, and who quickly put together their debut offering The Contaminated Void.

Unlike Nasum, Coldworker (Who also consist of ex-Phobos vocalist Joel Fornbrant, Ruin guitarist Anders Bertilsson, Carnal Grief guitarist André Alvinzi and ex-Relentless bassist Oskar Pälsson) is essentially a death metal act, with only subtle shades of Jakobson's grindcore past filtering through, making The Contaminated Void a little unexpected sound wise initially for Nasum fans, but enjoyable none the less for the most part.

A strong Cannibal Corpse influence is heard within the opening riff of the album's lead off track The Interloper, but it isn't long before the rest of the band join in, giving Coldworker a different, if somewhat familiar sound, which invariably allows the band to dodge the Cannibal Corpse clone syndrome. The follow up track D.E.A.D. boasts a great (Not to mention punishing) groove and solo moment, while the darker and slower introduction of An Unforgiving Season is quickly cast aside as the band go straight for the throat with its speed induced jump after the preliminary setting is forcibly thrown aside.

For the remainder of the album, Coldworker rarely break out of the mould set down with the opening trio of tracks. But having said that, there's plenty of variation and downright brutal moments (Especially within Fornbrant's vocal assaults and Jakobson's battery behind the kit in tracks like Death Smiles At Me, A Custom-Made Hell and They Crawl Inside Me Uninvited) to keep any self-respecting fan of modern death metal entertained, or at least until the band establish a sound that's rightfully theirs, and theirs alone.