The Fall Of Ideals 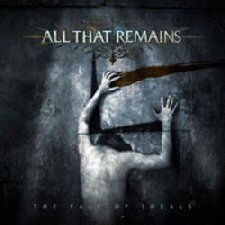 The rise to the top of the pile

At the point in time when vocalist Phil Labonte left the then relatively unknown Shadows Fall, his former band were on the path to where they are today. At the same time, the likes of Killswitch Engage and numerous other metalcore acts appeared with the cream of the crop floating to the top high and above the rest who were jostling for the rights of “who can be the best imitator” and such. The genre became saturated to the point of where it is today, with many metal fans jaded by labels signing “another metalcore act doing exactly what we've heard countless times before already”. Although it was a few years before Labonte resurfaced, his band, All That Remains, and their non-metalcore debut effort, Behind Silence And Solitude, did little in the way of anything. Their sophomore effort, 2004's This Darkened Heart, for as good as it really is, only made a reasonable impression on the genre's fans. Ultimately, it didn't (for whatever reason) compete at a bigger level with the releases of their peers. Fast forward to 2006 and with their latest slab, The Fall Of Ideals, all bets are off and the playing field has been truly levelled.

It doesn't take a genius to realise that the opening cut, This Calling, is a classic example of metalcore done exceptionally well. It immediately delivers the goods with a flurry of double kicks and Labonte's killer scream before unloading all of the key elements associated with the genre - aggression, melody, catchy hooks. Not Alone continues the high standard with a savage balance of flat out vocal aggression and solid melodies backed by perfectly complimenting guitars before It Dwells In Me slows things down a tad with its chugging riffs and soaring chorus that shows Labonte's vocals hitting the upper register with ease. Without doubt, We Stand, is as good or even better than any Killswitch Engage song that “the kids” are raving about this week. It's a simply stunning composition and further evidence that these guys should be further up the metalcore totem pole than they really are.

The sweeping chorus of Whispers (I Hear You) reinforces the band's strengths before the super aggressive track, The Weak Willed, unleashes Labonte's growling vocals to the max along side plenty of trademark melodic passages and some excellent unexpected dynamics such as the switch to the song's gentle ending in the final minute. Song dynamics are abundant throughout the frenetic Six, the ever changing tempos of Become The Catalyst and The Air That I Breathe, with the latter of the three throwing down as one of the album's finest moments, while both Empty Inside and Indictment round things out with machine gun like bursts of double kick and equally punishing riffs.

What All That Remains began with 2004's This Darkened Heart, they have refined, polished and improved upon tenfold with The Fall Of Ideals. This album should put this group at the same level as their peers. If you want to compare recent releases only, then this one is miles ahead of the pack. Fans of Killswitch Engage and the like should surrender their "metalcore cred club membership cards" and hang their head in shame if do not like this album. Put simply, The Fall Of Ideals is an outstanding slab of metal.