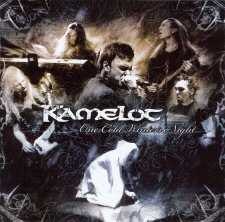 One of the best live albums I've ever heard is Strapping Young Lad's No Sleep Till Bedtime, which was album was recorded Live in Melbourne at the Hi Fi Bar. Years later I saw SYL at that exact venue and it sounded nothing like the live album. This is because the SYL live album had studio overdubs and, I assume, various other things to make it sound 'better'.

That's the problem with live albums, isn't it? If a band plays well and is recorded well, people will doubt it's really live and think the artist is hiding something. But if a band plays a bit sloppy or leaves in a couple of mistakes, rather than touching things up in the studio, people will think it's crap and will never listen to it anyway. It makes you wonder what the purpose of a live album is. Is it to document a time in the band's history for posterity; or is it merely a stopgap between live albums? Maybe sometimes it's just because a band plays well together. And that's sort of where we are with Kamelot.

Honestly, I'd never really heard Kamelot before I listened to this live album, but I have to say it's pretty impressive. I don't know if Kamelot are one of the tightest live bands ever or if there was some studio magic employed in the production of the album, but this is a sterling effort. In fact, aside from the obligatory swells of crowd noise and maybe a little more reverb on the voice than a studio effort, I don't know if I would have necessarily picked this as a being a live album on casual listen.

I think the test of a band's live abilities is to see if the songs stand up by themselves without familiarity with the studio versions. This was the exact situation i was in, not having heard any Kamelot studio work (at least not at any length , as far as I can remember), and I have to saw Kamelot came through with flying colours. These are good songs and the band is performing them as if they were telling these stories for the very first time. And I admire and respect that.

This is a double album, too. I don't know if Kamelot actually play this long each night, but it's a show of stamina if they do. Roy Kahn's vocals here are amazing. As far as power metal goes, he is unsurpassed. He makes use of his theatrical background in his vocal timbre and I suspect that's where he also gets his energy and drive.

Apparently the audio from this CD is actually taken from a live DVD, which I would be interested in seeing now. As good as live albums can be, it's always better to add the visual element. As such, there's some filler that would work better if there was the visual element, namely the keyboard and drum solos which are a little tedious on the ears alone, even if they are like fireworks on stage. In any case, for fans of this band or live albums, you probably can't go past this.