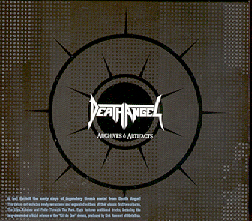 Metal, like most music genres, is ever changing. It seems that with every passing year, the scene changes once again, bringing to mind a huge evolutionary wheel that seems to forge past the old, and usher in the new. But with the metal scene in a constant state of change, it's sometimes only a matter of time before something old is once again hailed as new, and thus beginning the whole process once again from it's original starting point.

Thrash metal (Or speed metal, depending on your choice of terms) was a relatively short-lived period of metal history that saw the emergence of some of metals most revered acts. But as soon as it arrived, it soon too died a quick death as well (Leaving behind acts such as Megadeth, Metallica, Anthrax and Slayer to forge ahead and prosper above the rest). But in recent times, the second tier of thrash has had somewhat of a revival, with names such as Exodus (with their comeback album 'Tempo Of The Damned'), Heathen, Vio-Lence and Testament once again part of a growing movement returning back to the sound that had all but passed away years ago.

Another such act enjoying a second chance at life is San Francisco's Bay Area act Death Angel. Their comeback album 'The Art Of Dying' (Released in 2004) proved to be a huge success (After some fourteen years away), helping to spur interest once again in the genre. In light of their recent success, Death Angel (Alongside Rykodisc International) have decided to bring out of retirement their long out of print first two albums, along with a host of previously unreleased material in the form of the boxed set 'Archives & Artifacts'. Spearheading this four-disc collection is the group's debut album 'The Ultra-Violence'.

Originally released in 1987, 'The Ultra-Violence' was considered a landmark album for it's time, not only because the five piece act's (Who were originally vocalist Mark Osegueda, guitarists Rob Cavestany and Gus Pepa, bassist Dennis Pepa and drummer Andy Galeon) young age (An average of fifteen at the time), or their heritage (All cousins of Philippine descent), but because of their albums strong diversity ('Voracious Souls'), heaviness (The Dennis Pepa sung opener 'Thrashers' and the towering ten minute instrumental title track 'The Ultra-Violence') and youthful exuberance/humour ('I.P.F.S.', or 'Intense Puke Feeling Syndrome').

In all it's remastered glory, 'The Ultra-Violence' sounds better than it's ever done (Even if the album is somewhat amateurish compared to later albums), and is essentially to any self respecting thrash fan. As an added bonus, the bands second three-track demo 'Kill As One' (Recorded in 1986, produced by Metallica's Kirk Hammett, and which eventually earned them a recording contract with Enigma Records) is included. Of course, the recording quality is less than stellar over the three tracks ('Thrashers', 'Kill As One' and 'The Ultra-Violence'), but it clearly shows a unique talent from the bands earliest recordings.

The second disc in this collection is obviously a remastered version of Death Angel's sophomore effort 'Frolic Through The Park' from 1988. 'Frolic Through The Park' saw Death Angel refine their thrash style with a mix of controlled aggression and dynamics ('3rd Floor', 'Guilty Of Innocence' and the Charles Manson inspired 'Mind Rape'), hard rock influences ('Devil's Metal' and 'Confused'), funk influences ('Bored') and an obvious love of all things Kiss ('Cold Gin'). In regards to bonus cuts, 'Dehumanization', 'Silent Killer' and 'Witches Of Knave' (The definite pick of the three) all follow along the lines of the album itself style wise. While they're all in a 'working progress' form, they're certainly not up to the brilliance of the said album tracks, but interesting none the less.

Now comes the real gem in 'Archives & Artifacts'. The third disc (Appropriately titled 'Rarities') boasts eleven previously unreleased tracks recorded sometime between 1982 and 1989. There's virtually no information as to when the tracks themselves were recorded exactly (Which is a real disappointment), but again, tracks such as 'Vulture's Nest', 'The Hurt' and the absolutely dreadful garage recording of 'Frolic Through The Park' document the groups earlier full on thrash style. Elsewhere, 'Aspirations', 'Dismal', the harmonised vocal approach of 'Morrows Memoirs', 'Samson' and 'Betrayed' all represent Death Angel's latter day mid paced rock influences. Interestingly enough, both 'Conflict Of Interest' and 'Elegy' incorporates funkier (Slap bass) elements within their thrash framework, while the use of atmospherics in 'A Passing Thought' hint at what was later developed into the groups 'Act III' (1990) era.

Concluding this mammoth re-release is the bits and pieces D.V.D., beginning with a fourteen-minute plus electronic press kit put together by Enigma Records in support of their debut album 'The Ultra-Violence'. Live footage of the band performing in their rehearsal space (Which I suspect is Cavestany's parents garage) is inter-cut with interviews from all the members, as well as footage of the band out skateboarding. More often than not the footage is unintentionally humorous as they talk over one another throughout the interviews (Not to mention the performances of 'The Ultra-Violence', 'Mistress Of Pain' and 'Final Death'! Hell, they were so young! And check out the fashion), but this is absolutely priceless footage of the band from back in the day.

Also included is a five-minute T.V. interview from Finland (Again, with the tiniest snippets of live footage) and the promotional video clips for 'Guilty Of Innocence' (Made up of stock live footage from what appears to be the same source as the Finnish interview), 'Bored' and 'Voracious Souls'. This lavish package of remastered Death Angel classics is not only aimed at new fans (Who are out to discover more of what thrash has to offer since the release of 'The Art Of Dying'), but also the hardened fan with the host of previously unreleased material on offer.

It's hard to fault this exhaustive collection (Apart from the lack of track information, lyrics and the surprising absence of their first four track demo 'Heavy Metal Insanity' of 1983), and I can only hope that not only does it prompt a re-release post Enigma Records era Death Angel (How about a remastered version of 1990's 'Act III' with another D.V.D. Geffen Records?), but some long lost thrash classics from the same period.