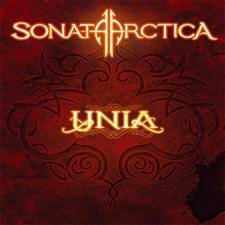 An icy blast of blazing prog

While this album marks both the 7th full length release and the 8th year of existence for Finnish progressive outfit Sonata Arctica, I must admit to having not heard much of the bands' previous work in the past. However that fact is something that may have to very quickly change, as on Unia the band dishes out some of the coolest, mature and most original prog I've heard in quite some time!

Interestingly enough, the band's name, in a sense, reflects their sound - compositional pieces with a distinctly cold, winter vibe. Through this aforementioned vibe and some clever compositional work (containing an intricate tapestry of shimmering keyboard melodies, razor sharp guitars and harmonized vocal lines) Sonata Arctica manages to keep Unia sounding refreshingly original. While you could say that Sonata Arctica share minor similarities with other prog/power acts such as Evergrey or Dream Theater for example, I don't think inter-band comparisons are likely to do this release or the band any favours (from a comparative perspective). It would be like comparing Among the Living with Reign in Blood - they both share some minor genre specific sounds but are both completely unique in their own right.

Keeping things consistent on the originality front, Unia features an array of tracks that remain vastly different (within the confines of the band's style and sound) and yet equally acceptable. From the aggressive opener In Black and White and moody Paid in Full to the sprawling ballad Under Your Tree and catchy hooks of The Worlds Forgotten, The Worlds Forbidden it's hard to pick a bad track on the album. Every song features a distinct personality of its own, and yet still manages to sound like Sonata Arctica. This skill is something that is often hard to master and as a result, something that is often hard to find. Though to be fair, occasionally there is nothing wrong with more of the same (especially if the same happens to be that damn good).

As well as a huge degree of originality, this album also showcases a depth of maturity that is rarely seen in releases these days, and is most likely a result of both the band's lifespan and the excellent sonic interaction between its members. Sonata Arctica doesn't seem to be one of those bands that only highlight the talents of a few respective band members while leaving the rest out in the cold - everyone forms a seemingly integral piece of the musical puzzle, to help create the type of sound which Unia so proudly displays. And in my opinion, that is what a band should be all about.

All in all Unia is certainly an album that's hard to find fault with - its original, mature has faultless musicianship (exemplified by the stellar musical interaction between the band) and is compositionally fantastic. What more do you want? Even if you're a Sonata Arctica newbie like me, a raging prog fan or just want to hear some quality sounds, I urge you to check this record out and latch onto a sound that I'm sure Sonata Arctica fans have been raving about for years!