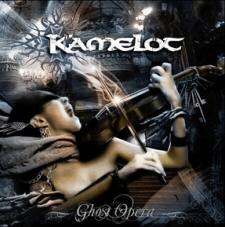 Consistency is the key once again

Unlike their last couple of efforts, Ghost Opera doesn't follow along a conceptualised storyline, which in turn has allowed the group the freedom to focus on individual songs rather than the album as a whole. The result of this directional change has given Ghost Opera an overall darker and heavier feel to that of previous efforts, without falling below the high standard expected of the band.

The minute long violin/keyboard based instrumental Solitaire essentially sets the mood for the opening track, with the instruments bleeding into Rule The World seamlessly. Rule The World is huge sound track that easily ranks amongst Kamelot's best with it's thundering drums, heavy riff structures, subtle orchestration/keyboards and Khan's impressive melody structures and powerful vocals. The faster title track Ghost Opera (Which is the first promotional video clip filmed for the album, and featuring a guest appearance by female vocalist Amanda Sommerville) is no less impressive with its greater use of orchestration amongst Kamelot's progressive power metal sound, while the power ballad Love You To Death (Again, featuring Sommerville) follows similar lines with the combination of orchestration and heavy riffs balanced perfectly.

The bass heavy The Human Strain, the dark Blücher (Featuring female vocalist Simone Simons) and the piano/orchestral based Anthem show a little more experimentation within the bands compositions with effects being utilised on both the musical front and Khan's vocals, which successfully manage to open up Kamelot's familiar sound a little further, while the powerful anthem sounding Up Through The Ashes, the fast paced Silence Of The Darkness (A track in which Palotai gets to show off his skills during the solo), Mourning Star (Again, featuring Sommerville) and the dramatic closer EdenEcho remain consistent to Kamelot's sound from the last three releases.

Although falling short of topping The Black Halo off its pedestal as Kamelot's crowning achievement to date, Ghost Opera is another in a long line of releases that will help Kamelot maintain their position at the top as one of the progressive power metal scene's best.