The Opposite From Within 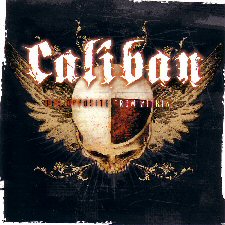 A shift in style is never an easy thing for fans to accept. From the outside looking in, it can be viewed as selling out, or going with the latest trend if the parallels exist. But giving bands the benefit of the doubt, more often than not, it's just a change withen themselves evolving as musicians that leads them to exploring new ideas. Germany's Caliban formed in 1998 and were considered at the forefront of the then almost unknown metal core genre. That was until their 2002 release Shadow Hearts - a release that drove a wedge into their fanbase due to the more than obvious influences of American metal core bands such as Killswitch Engage who they'd just completed touring with at the time.

It's been said that imitation is the highest form of flatery. Whislt The Opposite From Within isn't a true imitation of Killswitch's style, the influence is very obvious. What is also obvious is the somewhat formulaic song structure and I'm not referring to the verse-chorus-verse style either. It's the style of the choruses that basially gets a little old fast at times. You know - one clean guitar plays over a distorted guitar whilst the vocals switch back and forth between growls and actual singing. When Andy Dörner actually sings, it allows you to forgive the formula behind it as his vocal delivery on tracks such as Goodbye and Stand Up are nothing short of amazing. Having said all that, there's never a shortage of stomping riffs and moshable breakdowns that'll keep any metal core fan happy.