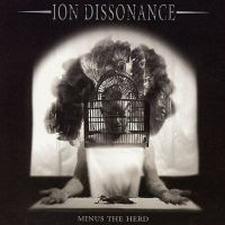 Hot on the heels of fellow Canadian extremists Despised Icon's new release The Ills Of Modern Man (Who not only share the same label home as Ion Dissonance, but have also shared members from one another in the past), Montréal based quintet Ion Dissonance have finally released their long awaited third full length effort Minus The Herd, which is their follow up to 2005's highly acclaimed Solace. Having parted ways with vocalist Gabriel McCaughry in (October) 2006, and recruiting former Shaolin vocalist Kevin McCaughey to take his place, Minus The Herd represents a new direction and sound for the band (Who also comprise of guitarists Antoine Lussier and Sebastien Chaput, bassist Xavier St-Laurent and drummer Jean-Francois Richard). But the changes aren't just from a vocal perspective; as the chaotic elements of Ion Dissonance's metalcore/mathcore sound has been toned down to make way for a groovier and more accessible feel throughout.

The Surge opens up with familiar detailed off-kilter riffing/rhythm patterns from the band that brings to mind Swedish progressive metal act Meshuggah, but rather than drift into some chaotic structures like their older material, the song remains in the strong groove that it started with, giving it some level of catchiness that isn't normally expected of the band. The follow up track Through Evidence follows along a similar path, but it doesn't take long to realise that while McCaughey is a strong vocalist (And not too dissimilar to McCaughry), his lack of variation from the standard glow approach gets fairly predictable and old rather quickly. The first promotional video clip from the album/single Kneel, the intense Scorn Haven and Shunned Redeemer do manage to shake up the album a little with plenty of twists and turns occurring within the structures of the songs, but the songs that follow (You Shouldn't Be Alive, Of Me...Nobody Is Safe, Void Of Conscience and Tarnished Trepidation) seem to lack the edgy/chaotic/technical of Ion Dissonance of old, instead remaining locked in the groove for the most part.

Minus The Herd is a solid album, a bold new groove based direction for the band and a worthy follow up to Solace. But having said that, it doesn't come anywhere near toppling Solace from its position as Ion Dissonance's finest moment to date. In other words, this is another good album from Ion Dissonance, but a little short of being a great one.