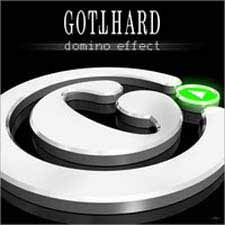 The time is right for Gotthard to go global

If there's one thing that can be said for Swiss hard rock act Gotthard, it's that they're definitely on a roll! After fulfilling their contractual obligations to B.M.G., Gotthard signed up to Nuclear Blast Records, with their seventh studio release Lipservice (Released in 2005) hailed as a critical success, and giving the band some much deserved attention outside of Europe. Rather than bask in their success, the band hit the road once again, with 2006 Live In Switzerland C.D./D.V.D. package only garnishing more praise for the band. Striking while things are hot, the five-piece act (Comprising of vocalist Steve Lee, guitarists Leo Leoni and Freddy Scherer, bassist Marc Lynn and drummer Hena Habegger) are back with their eighth album Domino Effect, and it would seem that the band simply can't set a foot wrong.

Written and recorded over a staggeringly short period of six weeks, Domino Effect picks up virtually where the band left things with Lipservice, all the while making some subtle changes to the formula in order to keep things interesting and different. Master Of Illusion is an energetic opener that's everything anyone could want from modern hard rock (Big heavy guitars, a driving backbeat and huge melodic sing along choruses), while the equally impressive Gone Too Far (Which boasts some Eastern influences in some of the riff structures) and the heavy title track Domino Effect keep the classic hard rock coming. Violins, piano and militaristic drums help introduce the first ballad off the album in Falling (That is before it picks up midway through with the help of Lee's incredible vocals), while the first single from the album The Call (Which is also the first promotional video clip filmed for the album) follows a similar power ballad route.

Helping pick up the pace, the orchestration enhanced The Oscar Goes To..., The Cruiser (Judgement Day), the bass thumping Heal Me, Come Alive, the Whitesnake sounding Bad To The Bone and Now are all Gotthard live classics in the making, while the slower Letter To A Friend, the predominately acoustic based Tomorrow's Just Begun and the laid back closer Where Is Love When It's Gone are scattered in amongst the harder rocking numbers, and give the album plenty of diversity.

Gotthard haven't really made an album that could be considered an absolute clunker, but there's a consistency within their last three releases that was perhaps a little lacking on previous releases. Unlike a lot of acts these days, Gotthard manage to take their hard rock influences from the '80's, and deliver it with a modern edge, with Domino Effect a perfect example of Gotthard's clever balancing act, not to mention talent as songwriters. If there's any justice, Domino Effect will be the album to turn them from just being a European name act to worldwide one.