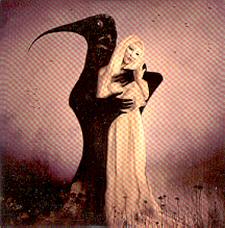 Colour this one by the numbers

Following hot on the heel of their signing up of North Hollywood outfit In This Moment in recent times, Century Media Records have signed up yet another female fronted metalcore act, this time in The Agonist. Founded as far back as mid 2004 in Montreal (Canada), The Agonist were initially as The Tempest, before making a slight change to their line-up (Which now stands at vocalist Alissa White-Gluz, guitarist Danny Marino, bassist Chris Kells and new drummer Simon McKay) and changing their name The Agonist just prior to being signed up to Century Media Records (In April 2007) for their debut full-length effort Once Only Imagined.

After a predictable thirty second introduction piece (Synopsis), the band hammer out the opening track on the album Rise And Fall in a fairly solid manner, with a Gothenburg melodic death metal influence heard in the jagged guitar riffs for the initial forty seconds. But beyond that start of the song, the remainder of the song follows the tried and true sound of modern day metalcore that's seems dealt out on an almost daily basis in recent times. Alissa White-Gluz is obviously the main focal point of the band, and while there's no denying that she can match the screamed aggression of other female vocalists on the scene, as well as equally impress with her clean and melodic efforts, it all goes to waste with rather unimaginative by the numbers metalcore song writing.

White-Gluz's strong clean melody lines are about the only distinguishing feature in the follow up track Born Dead; Buried Alive and Trophy Kill, while tracks such as Memento Mori, Void Of Sympathy and Forget Tomorrow (Which is preceded by the short acoustic instrumental Chiaroscuro) all show similar traits, but without standing out enough to distinguish one track from the next. Take A Bow, Serendipity and the single (And first promotional video clip) Business Suits And Combat Boots' showcase a slight change in direction from the other tracks by way of the guitarists (The riffing is actually a little different sounding), but it's certainly not enough to salvage what is a fairly predictable metalcore album.

The Agonist does have their moments of promise on their debut, but overall Once Only Imagined is a pretty ordinary metalcore album that delivers exactly what you expect from the genre. I can only hope that with their next album the band will be willing to experiment and challenge themselves a little more, rather than simply follow the crowd.

More from Agonist, The