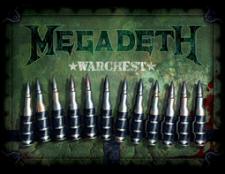 Megadeth are without question one of the most significant bands in the history of metal. Their longevity is testament to that. An original member of the “big four of thrash” - which also included Metallica, Slayer and Anthrax - Megadeth have survived more line-up changes than the aforementioned bands put together and whilst their modern day output might not compare to their classic old school catalogue, sans the odd “off the rails album” - specifically 1999's Risk - Megadeth are doing as they have always done. With Slayer unleashing their “best-of meets rarities meets live stuff” mega-collection in the form of 2003's Soundtrack To The Apocalypse, Megadeth, who's line-up has revolved somewhat steadily around vocalist/guitarist Dave Mustaine, have gone down a similar path with their first boxset dubbed Warchest.

With Warchest being as huge as it is - four CDs and one DVD in a three dimensional bullet belt covered box completed with a 36 page booklet of notes and pictures - this review will be a little different. The review will wrap up with the summary next after which an in-depth breakdown of every nuance of Warchest will be covered.

With the exception of material from their latest album, 2007's United Abominations (which was released on Roadrunner Records), Warchest is simply chock full of everything any Mega-fan could want. Old schoolers get to hear the remastered and at times remixed material from the band's extensive discography, and in amongst the singles, the classic material and the rare, lie previously unheard demo versions, studio takes, live tracks, soundtrack numbers, interview snippets, a full live show from the epic 1990 Clash Of The Titans tour and a live DVD shot in London on the 1992 Countdown To Extinction tour. I'm sure that Dave has more gems in his vault that we may or may never see, but for now, this is guaranteed to satisfy the band's hordes of fans. Put simply, Warchest is an absolutely essential part of any fan's collection or you cannot call yourself a Megadeth fan at all.

Ok summary aside, for those who really want the ins and outs of Warchest, it's time to put it under the microscope and find out just why it's so damned good! Initial impressions speak volumes and believe me, it'll get your attention from the moment you see the three dimensional bullet belt covered box. Open it up and you'll see four CDs - two inside the front cover, one behind the booklet holder and two inside the back cover - and a 36 page full colour booklet containing notes, pictures and more.

The first CD covers what most old school fans consider to be the band's best releases still to this day - you know, the guys who argue whether 1985's Killing Is My Business...And Business Is Good is better than 1986's Peace Sells...But Who's Buying? Or if 1988's So Far, So Good...So What? slays 1989's Rust In Peace - and for the record, the correct answer is Peace Sells...But Who's Buying? The first CD takes choice cuts from the recent-ish remastered and at times, remixed and re-recorded versions of those albums. The inclusions are predictable but you really couldn't expect anything less of a “best of”. But the diamonds in amongst them are the noticeably rawer sounding session take of Anarchy In The U.K./Problems, the Casey McMakin demo of Holy Wars...The Punishment Due, the demo versions of Tornado Of Souls and Five Magics.

Moving onto CD number two and Megadeth's 1992 album Countdown To Extinction and 1994's Youthanasia are the focus. Again the singles are featured as you'd expect, and they are joined by a demo version of Architecture Of Aggression, live renditions of Skin O' My Teeth, High Speed Dirt, Ashes In Your Mouth, and Sweating Bullets - all of which were B sides to some of the band's singles of that time - a session outtake of Breakpoint, and soundtrack and cover rarities including Diadems (from the 1995 Tales From The Crypt Presents Demon Knight soundtrack) and Paranoid (from the Black Sabbath tribute album Nativity In Black from 1994).

The band's commercial success peaked with their 1997 album Cryptic Writings which is the starting point for the third CD. It caries through to their most recent Capitol Records release, 2004's The System Has Failed, covering 1999's critically panned Risk and 2001's The World Needs A Hero. Once again the remastered and remixed key songs and singles are the focus with gems such as the live version of A Secret Place (from Woodstock 1999), the Japanese bonus track One Thing, the soundtrack only Duke Nukem, the Japanese only bonus track Never Say Die and Coming Home rounding out the rarities.

Even after three comprehensive CDs to this point, this boxset's real appeal for many will be the remaining two discs which begins with the fourth and final CD which features a complete live set from the group's appearance at London, England on October 16 1990 as a part of the epic Clash Of The Titans tour (which also featured Slayer, Anthrax, and Testament/Alice In Chains). Whilst the sound, which is clear and crisp, and setlist are indicative of the times, this 68 minute blistering live set captures the group (who were Mustaine, long time and now-ex bassist David Ellefson, guitarist Marty Friedman and drummer Nick Menza) in crushing form as they unleash scorching versions of (amongst others) Wake Up Dead, Hangar 18, In My Darkest Hour, Take No Prisoners, Peace Sells...But Who's Buying?, a cover of Diamond Head's It's Electric which features Diamond Head vocalist Sean Harris guesting on the mic, and the epic finale, Holy Wars...The Punishment Due.

Wrapping up Megadeth's Warchest is the 52 minute live DVD filmed on September 30 1992 at London's Hammersmith Odeon on the band's Countdown To Extinction tour. It may very well have been shot and aired on TV somewhere along the way, but this multi camera pro shot blast from the past is excellent. Mustaine, Ellefson, Friedman and Menza rip through material from the band's first five studio albums in a blistering yet compact live set under a huge light show in true Mega-style. This DVD just adds weight to the appeal of such rarities that this boxset has to offer.

Put simply, Megadeth fans can't call themselves fans (or Droogies as Mustaine refers to them) if they do not have this in their collection. It is that bloody essential!