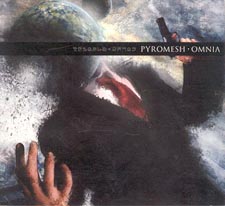 Fine example of prog metal from the west

Although having weathered several line-up shuffles since their formation (As far back as late 2001), and having only emerged with two modestly successful releases within that time (2003's five track E.P. Malevolence and 2006's stop-gap three track single Year Of The Phoenix), Perth (Western Australia) based act Pyromesh have finally overcome the challenges of the past to complete work on their debut full-length effort. Comprised of eight tracks, Omnia is the culmination of two years hard work from the five-piece act (Who comprise of vocalist Ael Bennett, guitarists Alex Lassetter and Clint Lawrence, bassist Joel Gardner and drummer Ashley Doodkorte), and their hard work has certainly paid off.

The opening track Apathy immediately proves that Pyromesh are anything but your standard progressive/alternative metal outfit, with co-producer Stuart James' unobtrusive string arrangements helping add some weight to the riff structures. The use of keyboards lends an air of drama to the heavier moments in the song too, giving Pyromesh a sound that is very much progressive sounding, yet undeniably aggressive and metallic in equal measure. The first three minutes of follow-up track Bathed In Flame sees the band in full-on aggressive mode with Bennett in particular leading the pack with his diverse screaming efforts. But it's around the halfway mark that the song heads in a completely different direction when it gives way for some great Nile-like Middle Eastern influences. The title track Omnia once again reveals a different side of the band's collective sound, with Bennett showcasing his clean vocals alongside his proven scream abilities, with the keyboards/samples dotted throughout giving the song a slight industrialised feel.

Living up to their names, Hellbent, Jezebel and One-Man Knife Fight see the band deliver a few punishing no-nonsense progressive tinged blackened/modern thrash metal tunes, whereas the lengthier pair of Perceptionless and Oblivion, see the band stretch themselves in a musical sense, with the progressive influences within the band's sound coming to the fore.

It may have taken Pyromesh a long time to finally get things off the ground, but with the end result being Omnia, there's no denying that the time spent has well and truly worked in the band's favour.