Fall Of The Leafe 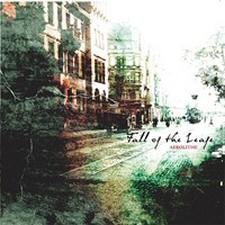 Looks can be and are deceiving

Y'know, I always try to never judge a book by its cover, but it can be difficult sometimes. Case in point - the now recently defunct Fall Of The Leafe. What the hell kind of name is that, and what's up with that album cover? I was a tad apprehensive of the unknown, but when it came down to it, it wasn't what I expected. Hell I don't even know what I did expect, but I guess, whatever it was, it wasn't really what I got - progressive goth metal I guess is how you'd describe the output from vocalist Tuomas Tuominen, guitarists Jussi HÃ¤nninen and Kaj Gustafsson, keyboardist Petri Hannuniemi, bassist Miska Lehtivuori and drummer Matias Aaltonen.

Several albums on, and the band and their style have morphed into the prog-goth metal that they are today, and the unambiguously titled Opening kicks things off unceremoniously and even at two minutes in length, it could have been dropped without being missed. Thankfully the rock solid sounds of All The Good Faith are a vast improvement as the band put on display their Amophis styled goth metal sans growled vocals. Both Drawing Worry and Lithe both up the ante in the heaviness stakes a tad but at no time do they really deliver the goods in way that makes you want to listen to the album over and over again a-la Amorphis for example. Perhaps that has to do with Tuominen's vocal style which suits what is going on here, but at the same time, lacks the variety and impact of clean versus growled vocals.

Appropriately titled, At A Breath's Pace travels along at about that, and shows signs of some of that aforementioned lacking vocal variation, but not to the extent that it saves the album or even the song itself. There's little to separate both Graceful Retreat and Sink Teeth Here at times and Minor Nuisance is just that really. From here on, meanders through Especially By Stealth and Look Into Me before predictably and uneventfully wrapping up with Closure, which is as equally pointless as the intro track.

Fall Of The Leafe in hindsight haven't gone out with a bang in the slightest. It's more of a dull roar really. Existing fans might find something here that I have missed, but for the most part, this style of goth metal/rock is being done by plenty of others in a much better manner as well.