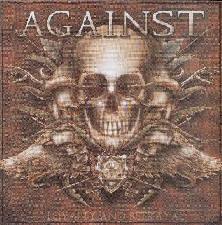 Four years after their formation, Queensland based hardcore outfit Against finally got around to releasing their debut full-length effort Left For Dead in 2005. Although having already establish a sound and reputation with their former releases (2002's independently released demo E.P. I Won't Be Your Fall and 2003's My Hate My Choice through Common Bond Records), Left For Dead cemented Against's standing as one of the true leaders within the Australian hardcore scene. After having spent the last two years supporting their debut release, the five piece act are back with a new line-up (consisting of vocalist Greg Appleby, guitarists Ash McIntyre and Andy Barber, bassist Steve Blackaby and drummer Brett Kearney), and a brand new album Loyalty And Betrayal.

Composed of a dozen tracks, and clocking in at a little under 22 minutes, Against don't waste their time getting to the point, and that's exactly what the opening track, One Step Ahead, does. The addition of new members into the group hasn't hurt Against's aim to deliver old school sounding hardcore, with the guest drumming performance from Nick Jett (from hardcore outfit Terror, who toured Australia earlier in the year) only helping to drive the band to deliver their best. Although a little slower in speed, Don't Pray For Me is a varied track that is full of great melodic interplay between the guitarists, while the gang vocalised Not in this Alone, All For Nothing and Slip Away show how far the band have come in the last couple years in regards to memorable song writing.

As with all Against releases, Loyalty and Betrayal features plenty of guest appearances. This time around, Against have managed to secure the services of Scott Vogel (who is otherwise known as the vocalist for Terror) on the speeding Against the Grain, Agnostic Front guitarist Vinnie Stigma on the title track Loyalty And Betrayal (which was originally previewed on The Trial & Error Hardcore Metal Compilation No. 7 release in 2007) and the legendary Roger Miret (Agnostic Front vocalist) on the pulverising Kill Or Be Killed. While it would seem that Against are relying purely upon guest appearances to help them out, it's quite clear with tracks such as Life Goes By, the savage In My Head, the thrashy Left For Nothing and Where's The Revolution Gone that Against are more than capable of holding their own.

With a stronger production, a strengthened line-up and the help of a few well known friends, Against have not only succeeded in building upon the debut, but have also strengthened their place within the Australian hardcore scene for some time to come.