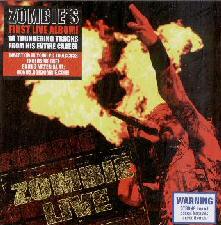 Long awaited and more than worthwhile

Rob Zombie's third studio effort was one that some wondered if it would ever come to fruition after his foray into film (House Of 1000 Corpses, The Devil's Rejects). Educated Horses did surface in 2006 and Zombie backed by his all star group featuring former Marilyn Manson guitarist John 5, Wednesday 13 bassist Piggy D and drummer Tommy Clufetos hit the road to support it. There's still plenty of Zombie fans yet to experience the group's live show, and finally, after a decade as a solo artist, Rob Zombie has delivered his first live album chock full of hits, classics and a few White Zombie classics as well.

The eerie opener from Zombie's last studio outing opens the show before the band launch full on into American Witch from the same album. Zombie et al cover all three of his solo releases and there's no shortage of hits on display either with the likes of Demon Speeding, Living Dead Girl, Dead Girl Superstar, Let It All Bleed Out, Demonoid Phenomenon, Never Gonna Stop, Superbeast, House Of 1000 Corpses, The Devil's Rejects, Lords Of Salem and the excellent closer Dragula all getting a good airing.

But given the man's musical heritage, it wouldn't be a Zombie show without the inclusion of White Zombie's biggest hits and the classics More Human Than Human, Supercharger Heaven, Black Sunshine and Thunderkiss '65 still sound as good today as they did way back when.

For a first official live release, Zombie Live lives up to what you'd expect. Classic Zombie material from both the White and Rob eras with a couple of the lesser known ones that should satisfy the die hard fans as well - it's all here. Zombie fans won't pass this one up!