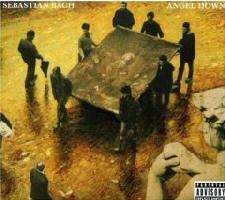 But when Bach's wail kicks in with the opening title cut, Angel Down, it's a strong mission statement for the album's dominating direction. This won't be a watered down pop rock kind of deal. This is Bach screaming his lungs out just as he did on the likes of Slave To The Grind all those years back. But it's the Iron Maiden-esque Euro strains of the excellent You Don't Understand that raises its hand as an early contender for best on ground, as Bach flexes his vocal muscle in a gentler manner by comparison to the title track. The first of three in a row to feature Gunners vocalist Axl Rose is their tip top cover of Aerosmith's Back In The Saddle, which is followed by the early Guns 'n' Roses sounding (Love Is) A Bitchslap and the slower, light and dark Stuck Inside, which is the weakest of the trio with Rose.

Bach gives Metal Mike's American Metalhead a bit of a workover, whilst aggression is the order of the day for Negative Light. It's not all rosey though with Live & Die falling short of the mark, and for those wanting I Remember You part two, then the ballad By Your Side will hit the spot. It feels a little tokenish given Bach's heritage though. Our Love Is A Lie rocks harder and stronger than the forgettable Take You Down With Me. Stabbin' Daggers pushes things back into the black before You Bring Me Down heads south again. Co-written with the (figuratively speaking) unseen member of Bon Jovi from back in the day Desmond Child, Falling Into You, has all the hall marks of a radio rock hit song from that era, and it's a nice enough way to wrap the album up.

Bach's first solo effort has some highs and some lows. Whilst it is decent enough and not short on variety, realistically, it could be shorted by three or four tracks and it would easily be elevated into a good if not very good album. Towards the end, it does feel as long as it is - 54 minutes in fact - and that is it's one real downfall and it's a significant one at that.