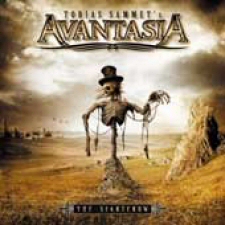 Back in the Spring of 1999, Tobias Sammet, primary songwriter and singer for German power metal band Edguy, began to write a metal opera that would be a truly epic undertaking, involving guest musicians and guest vocalists who would become the individual characters of the story. The project was soon deemed Avantasia, meaning a world beyond human imagination. This metal opera, completely released in two parts by 2002, was deemed by many as the unofficial follow up to Helloween's Keeper Of The Seven Keys, Part 1 and 2. And why not, as most of the tracks were sung by two of Helloween's former vocalists, Michael Kiske and Kai Hansen. Personally, I believe that Avantasia sounds much more like The Dark Ride era Helloween. Now finally, after 6 years Avantasia is back with a new play.

The Scarecrow is even more of an epic undertaking than Avantasia's previous offerings. There are still definite similarities to Helloween, but Michael Kiske only lends his vocals to three of the songs, making the songs more varied than on the groups previous release. Tobias Sammet, just like his previous album, adds his voice to all of the tracks on the album, and also plays bass on all tracks. Other guest vocalists on the album include Jorn Lande (Masterplan, ARK), Amanda Somerville (Aina), and most surprising of all, Alice Cooper.

Most songs on the album can be described as symphonic power metal, with traces of folk metal thrown in the mix. But the best term I have heard describe their sound would have to be stadium metal. The songs have so much presence and energy that they were made to be screamed across stadiums of thousands. The choruses are so catchy that you can imagine crowds of fans singing along in unison so loud that heavens shatter and hell is unleashed.

The album is diverse, and at times it transcends genres. No doubt this is aided by the diverse group of musicians and vocalists that feature on the album, but also by the quieter, more melodic songs that lend a bit more variety to the album, including a duet between Tobias Sammet and Amanda Somerville, which unfortunately is a bit of a disappointment due to the lack of emotion and connection between the two characters, something that an opera duet thrives on.

Standout tracks include the singles Lost In Space and Carry Me Over, and Alice Cooper does an amazing job with The Toy Master, giving the song a creepy, haunted touch. Given the lyrics, that describe an 'evil master of toys', Alice Cooper was the perfect choice to handle vocals on the track.

The Scarecrow is a brilliant release and a must buy for fans of Helloween. It is only unfortunate that given the saturation of the current symphonic metal genre, the album probably won't get the recognition it deserves. Although not every song is brilliant, there is more than enough quality music on offer to keep most listeners happy, and there is even more value in listening to the album from start to finish, as it is intended to be a story, and what value is there in reading a book with missing pages.