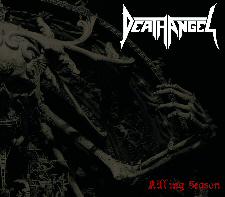 Death Angel have quite the history behind them. They've been recorded by Kirk Hammett (their Kill As One demo), released their debut long player before they were 20 (1987's The Ultra Violence), and broke up after a near fatal bus accident whilst touring on the back of their first major label album (their third effort, 1990's Act III). After being one of many acts to reform for 2001's Thrash Of The Titans gig, the band gained momentum and popularity once again which resulted in 2004's The Art Of Dying, and then another unexpected hiatus from the metal scene. Now, finally, the band's long awaited fifth effort, dubbed Killing Season, has been unleashed and it sees the group, who are vocalist Mark Osegueda, guitarists Rob Cavestany and Ted Aguilar, bassist Dennis Pepa and drummer Andy Galleon, in absolutely crushing form.

The opening cut, Lord Of Hate, and it's follow up, Sonic Beatdown, are a vicious one-two punch combination and when backed up with the heavy and catchy Dethroned, these three tracks signify the band that's now a well oiled machine, and in line to match it with their best album to date, that being 1990's Act III. The band has encompassed well balanced song dynamics with trademark Death Angel riffs and Osegueda's unmistakeable vocal bite and it all points to a band that are clearly their most focussed in a long time. Carnival Justice's centre passage shines brightly thanks mainly to Galleon's skinsmanship, but the interplay between drums and guitars are certainly a part of that success as well.

The growing chorus of Buried Alive and the song's final minute are aural bliss, whilst Soulless falls a little short of the rest of the material on offer. All is forgiven immediately when The Noose begins as it's obvious that it's going to be a track that'll rock your face, and it does just that, particularly as Osegueda screams the album's title throughout the choruses. The mid tempo of When Worlds Collide is a welcomed change up as is the effect laden God Vs. God and it's heavier than a really heavy thing chorus. Steal The Crown pulls on punches during its short tenure, before the gentle strains of Resurrection Machine usher in the album's final track, that soon enough unfolds into an epic album highlight.

There's no mistaking that with Killing Season, Death Angel are back with a vengeance. In the past, the quintet has been guilty of hit and miss albums between their peaks and The Art Of Dying was one of those hit and miss efforts. But not Killing Season. Killing Season is right up there with their finest hour and hopefully it will be the start of a more consistent run for one of metal's most underrated acts.