The Dawn of Enlightenment 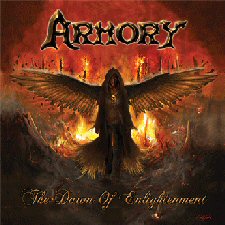 I love it when you put on a disc thinking 'here we go' and you end up thinking 'HOLY S**T!' That's exactly what happened around ten minutes after I hit play on Townsend, Massachusetts (USA) Armory's impressive release of Iron Maiden inspired melodic power metal. This is in fact a complete re-recording and re-packaging of an album released in 2004 and from the extremely professional product I am hearing and looking at, it was definitely well worth the effort. I don't know if it was my hangover from the Somewhere Back In Time Tour but I was really digging this album and gob-smacked to learn they aren't signed already.

Armory often bring to mind Maiden, Helloween and a host of other power/traditional metallers but mix it with enough youthful energy and thrashier musical elements (think Children Of Bodom) to keep it fresh and modern. Vocalist Adam Kurland (surely the love-child of Bruce Dickinson) has a great power metal voice that will only get stronger over time and he basically nails it here. Guitarists Joe Kurland (who also recorded the excellent drumming) and Chad Fisher are world class, especially when it comes to lead work, and talented bassist Thomas Preziosi has a distinctly Steve Harris busy style. Keyboards were provided by Peter Rutcho who the band approached to record the album and then ended up as a full time member.

The album of ten original tracks plus a bonus cover of Maiden's Flight of Icarus and Dr. Wily (a Nintendo game soundtrack!) clocks in at seventy minutes with most tracks over five minutes. On paper this looked daunting, especially the title track listed at over an epic 13 minutes, but as with all well written tracks the running time became irrelevant as the songs flowed and felt right. The stunning musicianship kept long passages of instrumentation interesting with soaring twin and solo lead breaks full of feeling and great technical ability in both playing and composition. A movie-like intro, double kick driven metal anthems, a blistering instrumental that sounds like an extended Megadeth Rust In Peace solo section, a big sing along ballad, harmonies and choruses that would make the Irons proud, an epic last track and an overall great sound really make this revamped debut worth a listen.

If Armory could get the same foot in the door that fellow (but much less talented) US power metallers Ignitor have achieved in Europe then they would probably be scoring spots on many a music festival. For what's on offer here these guys are one of the most talented I've heard of late (especially from the US) and if they aren't signed to a label by the time they get around to their next recording I'll gladly eat Manowar's leather chaps!