And Blood Was Shed in Warsaw (DVD) 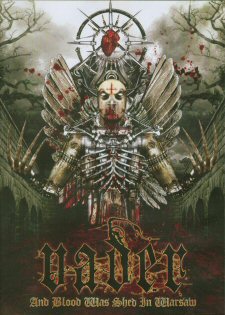 A glimpse of the veterans at their best

It is hard to believe that Vader, Poland's original extreme music export, are powering into their 25th year of existence without even a hint of slowing down. This, their third video release, is taken from the band's performance at the Stodola Club in Warsaw, Poland in February 2007.

Having never had the opportunity to see the band play either in the flesh or via recorded media I was curious to see how the veterans would fare, not only from a physical standpoint but also how they would manage to forge a set list from 25 years worth of material.

With a back catalogue as large as they have, it is unlikely that a single set list will comprise everybody's favourite songs but I think the band managed to provide a good cross section of their material from their early days right through to their latest album. I was personally happy to hear some of my own favourite tracks including Silent Empire, Sothis, Lead Us and Carnal, amongst the litany of crowd pleasers.

It is clear that a lot of planning went into the production of this DVD with no less than seven cameras in operation to capture all of the action from practically every vantage point possible. New drummer Daray shares less of the overall attention than the rest of the band which is a shame as I was extremely interested to see the replacement for the sadly departed Doc in action. Nonetheless, the viewer is graced with shots from all over the stage and the floor and gets a great sense of the action that transpired during the show. Conversely however, it could also be fairly argued that there is almost too much movement between shots and cameras which ultimately denies the viewer the opportunity to focus and absorb what they are seeing.

One area that cannot be faulted is the sound which truly is incredible. There is a clarity to the sound on this disc that I wasn't wholly expecting. Somehow it maintains the rawness of a live performance but also adds depth and punch to the mix as well, effectively bridging the gap between a live recording and that of a regular full length album.

As well as the performance itself, the DVD features an assortment of extra features ranging from the superfluous (websites, logo etc), to the good to have (video clips, extended discography), to the truly interesting such as the lengthy interview with Peter which, though only running for about 25 minutes, manages to cover a lot of ground and is very worthwhile and informative.

As with most music DVDs a stereo and a surround mix are provided but unfortunately I lack the facilities to accommodate the surround mix. I do feel that I can assume quite safely that if I could have experienced the surround mix that it would be as good if not better than the superb mix afforded the stereo track.

It is true that over the years my interest in Vader's style of thrashy death metal has dwindled, but I still walked away from watching this DVD feeling rather impressed. After a quarter of a century they are a band that have endured their fair share of hardship but still push on and continue to garner a hell of a lot of respect for their efforts.

If you aren't already a fan of Vader then it is unlikely that this DVD is going to change your mind, but anyone with even just a passing interest in the band will find this to be one of the best examples of how to put together a music DVD.