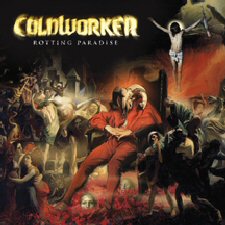 Another 'metal legend' died in December 2004. Mieszko Talarczyk was the frontman of one of the most influential (for bands and fans) and industrious grind bands Nasum. That Dimebag had been murdered weeks before was crazy, but hearing that one of your idols (and brilliant extreme metal record producer) had been taken by the Boxing Day tsunami, the most devastating natural disaster witnessed in my lifetime, was simply numbing. Tragically, it was his 30th birthday and his only holiday/work break he'd had in many years. That fucked my Christmas to put it lightly, not to mention the band members, family, friends and fans who had to wait until February 2005 for his body to be identified. For the members of Nasum, current and past, it meant the end of a prolific era.

Nasum co-founding member Anders Jakobson, after much soul searching and hard work on the ongoing Nasum legacy, announced he was to form the band Coldworker. Shortly after, their debut album The Contaminated Void was released and it was a corker. A solid mix of Nasum-like grind chaos and hook-laden, brutal death metal that had many extreme metal fans salivating. A few years on and the release of their follow up, Rotting Paradise, is upon us ... and my studded leather-clad Lord it's brutal.

From opener Reversing The Order to closer Deliverance Of The Rejected, Jakobson and guitarists Anders Baerilsson and Andre Alvinzi, bassist Oskar Palsson, and vocalist Joel Fornbrant prove The Contaminated Void was merely an appetiser to the Coldworker onslaught. Self-produced but mixed and mastered at Unisound studios by legend Dan Swano, the sound is thick and heavy and the ideal driving force for the aural battering at hand.

Taking the essence of what made bands like Entombed and even The Haunted so popular back in their respective early days, then forcing it through the Anders Jakobson grind-o-matic machine, Rotting Paradise is a non-stop freight-train that one second is chugging away, the next takes off at blistering speed. Blink and it will run you down! I am not going to name highlight tracks here because if you're a fan of fast death metal/grind laden with memorable yet destructive riffing, guttural vocals and a sublimely fast pace and that only lets up long enough to brutalize you with some fine chugging heaviness, you will love this album from start to finish as much as I did.

A fine follow up album and one that many modern death metal bands should take heed of ... it is possible to be inhumanly fast and brutal without giving up the hooks that made the albums of yesteryear so memorable even to this day.

This one is a must have!