The End Of All Once Known 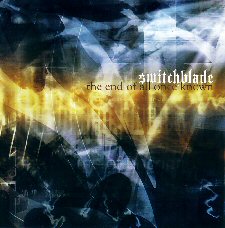 Staking a claim for the New Wave Of Australian Heavy Metal

If anyone said that the Australian metal scene was lifeless, they'd be flat out wrong. We've got everything from power metal to nu-metal to black metal amongst others, and now we can say that we have our first NWOAHM contender. In fact, I'm just going to call it the New Wave Of Australian Heavy Metal. Sydney's Switchblade have been busy holed up in Astennu's (ex Dimmu Borgir) studio getting around to the one thing that many have been waiting for - their debut long player.

Over the course of the last few years, they've teased us with a couple of demo releases and EPs that failed to show an identifiable consistency between them, and solidified their sound with the addition of a second guitarist in Scott Bernascone. The releases did however allow them to tour what seems to be almost constantly for such a young band enjoying a couple of shows up here in Brisbane as well a coveted opening slot for the Sydney stop of Machine Head's 2004 Australian tour.

The End Of All Once Known kicks off with the crushing Cataclysm. As the opening riff kicks in, the first thing that I noticed is the change in Sway's vocals. Sounding more along the lines of death metal rather than metalcore etc, they are more defined than ever before and now fit perfectly with the music behind them. The rest of the track strikes the perfect balance between brutality and melody with the harmony breakdown behind the vocals in the chorus. In fact, it's hard to get that breakdown out of my head after a few listens. The fast pace continues with the Wings Of Redemption and it's frantic riffs behind a barrage of drumming courtesy of Mat Piccolotto. Stabbing Machine sounds just like the name suggests with its accentuated beats during its opening and the reworking of Convulse showcases the difference in adding a second guitarist.

The metal madness continues with the stop-start riffage of Dissect and the semi-Fear Factory sounding (circa Soul Of A New Machine) Concrete. The variety of metal offered up here is amazing. No two songs sound the same but at the same time and they remain fairly distinctly Switchblade sounding. Guitar solos are tastefully added throughout courtesy of Bernascone and long time Switchblade axeman Andrew Najdek, one of which closes the track Tremors before the thrashy Eradicate kicks in with its brief drum intro before Incineration wraps up the forty minute metal massacre.

As I said at the start, Australia has a varied and flourishing metal scene. With the release of their debut album, Switchblade are truly showing that they can stand proud amongst the best of the current crop of metal bands worldwide. The End Of All Once Known is definitely one of the best debut metal albums by an Australian artist in recent years. It's still early days but this could very well be a strong contender for the Australian metal release of this year.