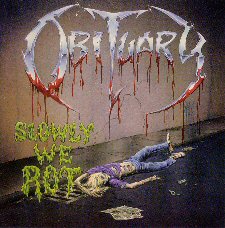 As the death metal genre began to pick up momentum during the late part of the 1980s, along came Florida's Xecutioner who stood out from the pack with riffs that mixed speed and doom as well as the unique vocal talents of John Tardy who still to this day has one of the most unique voices in death metal. The complete line-up consisted of Tardy on vocals, his brother Donald on drums, guitarists Trevor Peres and Allen West on lead, and Daniel Tucker on bass. They changed their name to Obituary and signed with Roadracer Records - a now defunct division of Roadrunner Records - and holed up with Scott Burns to record their debut album.

Obituary's Slowly We Rot is twelve tracks of the most brutal and original sounding death metal ever recorded back then and the same can be said today. I cannot think of a band since I first heard these guys back in 1990 or so that sounds anywhere near what these guys do. Slowly We Rot, although somewhat tinny sounding at times especially with the drums, help further define death metal. Obituary continuously threw down brutal, sludgy slabs of metal riffage that plodded along at a tortoise's pace which would change up in the blink of an eye to a barrage of speed without compromising the overall brutality.

But it was John Tardy's insanely unique vocal approach to death metal that would make this band stand out. Every band and their dog were utilising Morrisound Studios and Scott Burns, but it was Obituary who was always instantly recognisable as number of artists in the genre grew rapidly. Slowly We Rot set the trend for future Obituary albums by not including a lyric sheet which led to speculation that they never wrote lyrics. So what if they didn't? It certainly didn't detract from the bludgeoning heaviness of the album and the standard that it set. From the thumping opener Internal Bleeding to the heavier than everything else title track through to the furious paced Gates To Hell and the crushing Bloodsoaked, Obituary had more than made their mark during the critical time that would shape the future of death metal. Back then no one even come close to imitating Obituary and their unique style. No one has done so since then either. This is essential death metal at its finest.