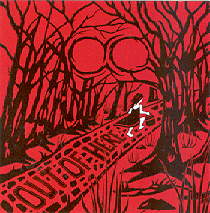 Good potential in need of a good sound mix

A year after introducing themselves onto the independent hard rock Melbourne scene with their debut four track E.P. Breath Away and constant shows around the state, four piece act Alpha State (Founded in late 2002, and consisting of vocalist M, guitarists Daniel Wright and Craig Rodgers and drummer Shaun Mayer) have re-entered the studio once again to capitalise on their growing reputation within the scene (As both a live and recording act), with the results being their latest E.P. offering Out Of Here. As you would expect, Alpha State have come some way in both the song writing and performance department from their achievements on Breath Away, with the lead off track Feed showing off their newfound strengths in every way.

Taking on a heavier approach than before, Feed combines a thick bottom heavy sound (Without falling into the dreaded nu-metal sound associated with the description given), with M finding the balance between maintaining a pop sensibilities and aggression. Fractured casts aside all allusions of lulling the listener into any safe haven by driving home a metallic message of pure heaviness (With some great screaming efforts from M around the three quarter mark), while Meltdown utilises cleverly constructed atmospherics (A credit to the guitarists) to build up initially before nailing an infectious chorus.

In a complete turnaround, Rain 4 Eva is the big sing along hit on the E.P. with it's feet firmly entrenched in the pop formula that has seen acts such as Evanescence rise to the top of listeners play lists. And while it sounds a little out of place (Given the overall heavier side sound Alpha State have aimed for on the E.P.), it's actually a welcome change of pace for the half way mark. The driving Exit Wounds shows a little more of a rock 'n' roll spirit within the band, and while a good track, it unfortunately doesn't quite work as well at gelling into the rest of the other tracks. The final number is by far the biggest surprise, and the best the E.P. has to offer. While the original version of Feed was a winner from the outset, this remixed version from D.W. Norton (Ex-Superheist/Walk The Earth/renown producer/mixer) seems to really add an extra dimension to the bands sound, and draws the bands qualities out of the dark and into a new light.

Alpha State have all the right elements in place with Out Of Here, and barring a professional mix (The bands own mix is good in itself, but what a job Norton does!), this is a great release from a band that given time, with produce an absolute killer that will draw some well deserved attention and exposure their way.