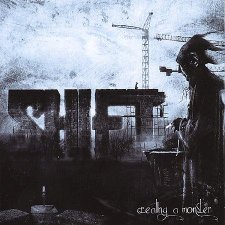 An absolute monster of a debut album

After more than fifteen years together (From 1986 through to 2001), and five full-length albums to their name, Baltimore (Maryland) based progressive power metal act Mystic Force decided to finally call it a day. But from out of the ashes of their former group, guitarist Rich Davis and drummer Chris Lembach decided to continue making music, and with the addition of vocalist Jeff Caudle, guitarist Doug Guthrie and bassist Steve Shaffer, formed Shift.

Initially released independently in 2006, Shift's debut full-length effort Creating A Monster has now been picked up by Nightmare Records, which has offered Shift the opportunity to get their music out to a wider audience. And I have to say that the real winner in this newly formed partnership is the listener, as Creating A Monster is easily one of the best debut efforts I've heard in years.

Mixing progressive metal elements with a touch of late '90's alternative rock/grunge and modern metal influences, Shift are a diverse and forward thinking act, and one that aren't all that easy to pigeonhole in the genre sense. The track Welcome Change is a huge opener with some great tribal-like rhythms clashing with some equally intense jagged thrash-like riffing. But while the music is a standout, it's Caudle's powerful vocal performance out front that really completes the Shift sound. His ability to project a towering aggressive tone while keeping a sense of melody to the whole proceedings is truly astounding. And his voice is as every bit as essential as any other instrument within the group.

Escape The Machine is equally as hard hitting as the opener, while the slower paced Devil Beside and the experimental Sins are just two tracks that seem to fluently move from one sound/movement to the next, but without sounding forced or unnatural in any way. Caudle shows off his incredible range on the emotion heavy Blood, while the guitarists deal out some punishingly heavy riffing on Gone Wrong and Taking Lives. In terms of melodic hooks, the entire album is full of choruses that are memorable. But it's songs such as To Have You, Rise Up (Which is preceded by the short tribal influenced instrumental Choir Of The Damned) and the epic closer Without A Soul that stand out as the catchiest efforts the band have to offer.

Few bands ever really create the perfect album. But in the case of Shift, they really have created a monster and delivered the full package. This is one band to genuinely keep an eye out for in the future.