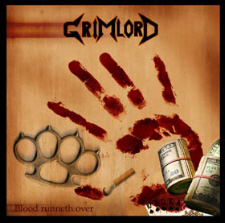 Some potential that needs a little work still

When you think of the bands that have emerged from the thriving Polish death metal scene over the last decade, acts such as Vader, Decapitated, Devilyn, Yattering and Exit Wounds, generally come to mind. So it comes as quite a surprise to find that the latest Polish act to come across my desk isn't an extreme metal act, but more a melodic/thrash metal act. Of course, the band I'm talking about is Wroclaw based three piece act - Grimlord.

Founded back in 2000 (Out of the ashes of Vallachia), Grimlord (Who comprise of vocalist/guitarist Bartosz 'Barth La Picard' Zrebiec, bassist Bartosz 'Orson' Koprowski and drummer Lukasz 'Lucass' Boratyn) have consistently been releasing demos since their formation, with their debut full-length live effort Live In Ohlau emerging in 2002. Now, some five years later, the band has finally released their sophomore effort Blood Runneth Over, and the results aren't all that bad.

The opening instrumental March Of Martyrs certainly provides a great start to the album, with the thrash-like riffs sounding quite interesting. Of course, the production is a little on the cheap side (Especially within the drum sounds), but it doesn't take away from the fact that the song itself is pretty impressive. The title track Blood Runneth Over is the first to feature vocalist Zrebiec, and while he doesn't completely destroy what is essentially another interesting composition, he certainly doesn't do it many favours either. In short, his Polish accent (Which isn't too far from sounding German) takes a little getting used to, and tends to distract from the music that's going on behind the scenes.

Notwithstanding the vocals, Grimlord are quite a diverse animal on the music side of things, with traces of old school thrash hinted at in B.W.A.K.U.C. (Beast We are Keeping Under Cover), alternative/hard rock in Grey Eminence, melodic hard rock in Crawler and a touch of power metal in Compensation Of Fault.

Despite bad production values, vocal inconsistencies and a general lack of direction found amongst the eleven tracks, Grimlord are a pretty solid act on the musical front throughout Blood Runneth Over. As soon as the band hits upon a direction they're happy to stick with, a capable vocalist and the right studio, Grimlord may just find themselves an audience beyond the shores of their own country.