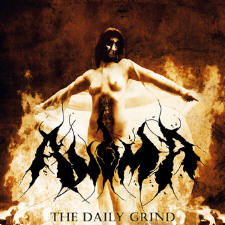 Generic deathcore that brings nothing to the table

It's commonly known that over the last couple of years, the metalcore scene has well and truly become saturated with a seemingly endless number of bands that continue to release albums each and every day that passes. But what everyone hasn't cottoned on to just yet is that the deathcore scene is quickly catching up in terms of the number of albums that sound almost like a rehash of the last release you heard from something playing within the same genre. And if any further proof is needed - we have Anima and their sophomore effort The Daily Grind.

Hailing from Germany, this young five-piece act (Who comprise of vocalist Robert Horn, guitarists Steven Holl and André Steinmann, bassist Justin Schüler and drummer Benjamin Kühnemund) released their debut full-length effort Souls Of The Decedents in 2006 (Through All Life Ends Records) after a couple of formative years under the names of Metmachines and Today Heaven's Dying.

The band initially had plans to follow-up their debut with a five track E.P. But for reasons unknown, the said E.P. never materialised. That was until earlier this year, when Metal Blade Records offered Anima a deal, which has now allowed the band's planned E.P. to finally see the light of day, with the addition of four extra tracks.

It sounds like a winning deal across the board for everyone. But in reality, it's the listener who gets the raw end of the stick here, as The Daily Grind is again just another deathcore album played strictly by the books. In comparative terms, Anima plays deathcore in a similar manner to The Black Dahlia Murder, Machinemade God and Job For A Cowboy. But what separates Anima from the other mentioned bands is their inability to inject anything new or different into their sound that hasn't been heard a million times before.

Aside from the fact that it only has a running time of just over thirty-three minutes, the only positives worth pointing out from The Daily Grind would be A Wrong Person To Trust In for its extended solo work, and the general groove that underpins Sitting In The Wardrobe.

In order to stand out amongst the crowd, you really have to come up with something fresh and new to survive. Sadly, Anima's The Daily Grind doesn't even come close to doing that.