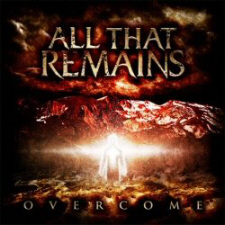 Not quite overcoming the brilliance of their previous effort

All That Remains came of age with their third album, 2006's The Fall Of Ideals. It really was the album that established the group (who are vocalist Philip Labonte, guitarists Oli Herbert and Mike Martin, bassist Jeanne Sagan and drummer Jason Costa) in their own right, as opposed to being “the band formed by one time Shadows Fall vocalist Labonte”. It was one of the standout albums of 2006 and two years on with a bucket load of touring and the success of that album under their belt, this Boston (Massachusetts, U.S.A.) quintet have taken on the tough task of following up The Fall Of Ideals in the form of their fourth long player dubbed Overcome.

Before The Damned is a bloody fine opener. Labonte's vocals soar during the chorus and all the while, there's no shortage of heavy metalcore riffage done right throughout this and Two Weeks. However, Undone sees Labonte's vocals unusually losing some of their identity and leaves the song overall sounding like it could be a Trivium song. The odd time intro of Forever In Your Hands soon settles into a stomping mid pace laced with plenty of colourful fretwork and chord patterns and quickly asserts itself as one of the standout tracks. Chiron opts for a quicker tempo and more growled than cleaned vocals shows the band's more violent mood swings with a gentle acoustic interlude midway through.

It's not all rosey though with only the chorus saving the generally unexciting Days Without. Things get back on track with the brilliant A Song For The Hopeless which perfectly flip flops between some truly stunning acoustic passages and flat out aggression. It's just one fine example of shredding lead breaks from an album full of them and easily another of the album's finest moments. Do Not Obey follows a path similar to that of Chiron before the textbook All The Remains sounding Relinquish and the flat out paced title track, Overcome, make way for an interesting choice of a cover song - Nevermore's Believe In Nothing (from their 2002 effort Dead Heart In A Dead World). It's a very true to the original cover with Labonte doing a fine job on the vocals even if the song itself is quite outside of what you'd associate with All That Remains.

There's no doubt that once more All That Remains have delivered a mighty fine slab of metal, and as I've said before, they are easily as good as if not a damn side better than most of them as well. Whilst Overcome falls the tiniest bit short of bettering their last outing, The Fall Of Ideals, it does clearly show that this quintet are consistently churning out top shelf releases and this one is no different.