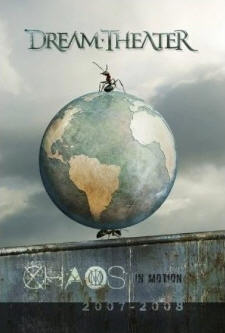 Fans will love the insight

After a year in support of their ninth full-length release Systematic Chaos from 2007, New York based progressive metal outfit Dream Theater have put together a brand new D.V.D. for fans, with Chaos In Motion 2007 - 2008 documenting the group's highly acclaimed Chaos In Motion World Tour.

This first disc of this two disc D.V.D. set comprises of Around The World In 180 Minutes, which as the title reveals is a little over three hours of Dream Theater live performances. But unlike 2004's Live At Budokan and 2006's Score, which featured a complete Dream Theater show, Chaos In Motion 2007 - 2008 follows the format that was first seen on 1998's 5 Years In A Live Time, with the fourteen track set list pieced together from shows recorded in the Netherlands (Rotterdam), Argentina (Buenos Aires), Canada (Toronto and Vancouver), the U.S. (Boston) and Thailand (Bangkok). As you would expect, the quality of the live footage varies from city to city (Everything from the professional, right through to the raw and deliberately out of focus bootleg kind of stuff), but not at the expense of the audio, which manages to remain consistent throughout.

Set list wise, Dream Theater have always been careful not to cover the same old songs, and the band's latest D.V.D. is no exception. Relying more on the band's latter day material, with the heavy Panic Attack, The Dark Eternal Night, Constant Motion, the epic In The Presence Of Enemies, The Ministry Of Lost Souls and the closing Shmedley Willcox (Which is a medley comprising of Trial Of Tears, Finally Free, Learning To live, In The Name Of God and Octavarium) the definitive highlights. The classic Take The Time still sounds great after more than sixteen years, and Lines In The Sand is given a whole new life after hearing it in the live forum. Unfortunately Surrounded doesn't hold up so well, with vocalist James LaBrie trying his hardest, but falling a little short of hitting the high notes he once was capable of.

The selected interview footage and promotional ads interjected between the various songs is interesting (Especially the footage of Opeth's Mikael Ã…kerfeldt on the shortened version of Repentance), and at times even funny, and again reminds me of the way 5 Years In A Live Time was set out.

The centrepiece on the second disc of Chaos In Motion 2007 - 2008 is the ninety minute behind the scenes documentary Behind The Chaos On The Road. The feature is split up into four parts, with the first part showing the band talking (Including the quietly spoken bassist John Myung) about the rigours of touring, the balancing of family life and the job in Dream Theater, and their general feelings toward one another. The second part allows the band's crew to explain their respective roles, and what is required of them to get a Dream Theater show underway on a daily basis. The third part reveals what goes on behind the scenes prior to a show (Drummer Mike Portnoy steals the show with his over the top demands for some 'Rock Juice' and his efforts to make a wish come true as part of the Make-A-Wish Foundation), while the conclusion deals with what goes on just prior to the band taking the stage.

Overall it's an interesting documentary, with plenty of informative tantalising information to please the diehard fans out there, while giving those unfamiliar with the band an in-depth view of what life is like within the band. Apart from the documentary, there are also promotional video clips for Constant Motion and the animated Forsaken, along with 'in the studio footage' of Dream Theater recording Forsaken and The Dark Eternal Night, along with live screen projection films for The Dark Eternal Night (N.A.D.S.), The Ministry Of Lost Souls and In The Presence Of Enemies Pt. 2 and a photo gallery. While all are interesting, there's nothing here that most casual fans wouldn't watch more than once. There's also Portnoy's eight and a half minute tour of the stage, and his five and a half minute tour of backstage. Again, while both are interesting, there's little to warrant a repeat viewing.

Chaos In Motion 2007 - 2008 may not offer up the pristine presentation of either Live At Budokan or Score, but then that's not really the point, as Dream Theater have always tried to offer up fans something new with every new release. And while I still have reservations as to whether or not this latest release stands up against their former D.V.D. releases, I still highly recommend the band's latest release for some truly amazing live performances, and an insight into what really makes the band tick.