All That We Needed 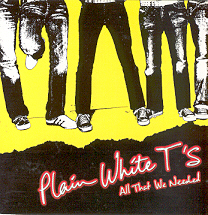 Not as bland as the name suggests

When Jimmy Eat World chose to have Chicago rockers Plain White T's support them while on tour of their latest album (2004's Futures), it was pretty fitting. After all, if you happen to like Jimmy Eat World, there's every chance you'll fall in love with Plain White T's as well. Founded in 1997 by vocalist/principal songwriter Tom Higgenson (Who originally started out as the drummer) and guitarist Dave Tirio, the band has done time as a covers act, weather numerous line up changes and eventually refined their sound and vibe through their independently released debut Come On Over in 2001, and their sophomore effort Stop in 2002.

Three years later (And numerous tours jaunts throughout with acts such as Sugarcult, Yellowcard, Story Of The Year, Fall Out Boy, Saves The Day, Hot Rod Circuit and Sum 41), and Plain White T's (With the remainder of the band filled out with guitarist/vocalist Tim Lopez, bassist/vocalist Mike Retondo and drummer De'Mar Hamilton) return with their third, and strongest effort to date.

Over the course of All That We Needed, Plain White T's mirror the song writing finesse that Jimmy Eat World mastered with their phenomenal smash hit album of 2001 (Bleed American), while managing to distance themselves far enough apart to retain their own identity. The title track All That We Needed is a clear indication of what's in store throughout the album with its breezy pop-punk vibe, catchy melodies (With themes of boy meets girl, girl breaks up with boy, boy getting upset and repeating the said scenario over again taking up the majority of the lyrical content), inoffensiveness and simplistic musical backdrop.

From here on in, the album maintains the consistency of the opener (In particular with tracks such as Take Me Away, My Only One, Breakdown, Faster and Last Call), with the only variances occurring with some slightly heavier tunes (Revenge and Anything), dominating luscious harmonies (Sad Story and What More Do You Want?) and the closing acoustic number Hey There Delilah.

Plain White T's aren't rocket scientists, and All That We Needed isn't an overly complex album by any stretch. But what it does manage to provide is simple entertainment, guaranteeing this little album a few more spins over others that simply try too hard at achieving the same goal.