The Way Of All Flesh 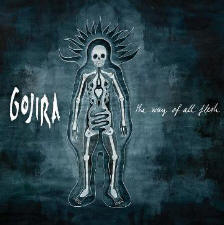 Until recent times, specifically 2006's From Mars To Sirius, French quartet Gojira were relatively unknown in the metal world. But that album, the band's third, was the start of bigger and better things for the group, who are vocalist/guitarist Joe Duplantier, guitarist Christian Andreu, bassist Jean-Michel Labadie and drummer Mario Duplantier. It lead to many a tour with some of metals big name acts, made many Top 10 lists for that year and flat out became the pinnacle of their output to date. In fact, it's most likely to be the yard stick for all of their work for some time to come and immediately under the microscope is their follow up effort, The Way Of All Flesh.

By this stage of their career, Gojira have a well established sound and accompanying M.O. and that is immediately obvious when Oroborus fires up spewing forth spiralling riffs and twisted vocals. The brutal jarring nature of Toxic Garbage Island is more in line with material from The Link (2004) as opposed to the fluidity of the From Mars era songs and it's certainly a change up early on. Continuing with A Sight To Behold, with it's heavily effected vocals, it unloads riffs more in line with the From Mars material, but it's Yama's Messengers that breaks out into a frantic pace just over two minutes in that is an unusual surprise to say the least. Back on track from what we know to expect from Gojira is the hauntingly dream like instrumental The Silver Chord which serves as a dark interlude that's well placed on an album that you wouldn't expect a need for an interlude.

With the sombre tones of The Silver Chord fading into the distance, All The Tears leaps to life in a down to business manner and whilst the rhythmic Adoration For None is the only track to feature a guest on The Way Of All Flesh, Lamb Of God vocalist Randy Blythe, it's the ten minute The Art Of Dying that is truly engrossing with it's rhythmic The Link era like intro that paves the way for blasting passages in amongst flowing, slower trademark Gojira riffs. It's a triple play of brilliance that also includes the stop start angular riffs of Esoteric Surgery and the stomping charge of Vacuity. Whilst not inherently bad, Wolf Down The Earth just doesn't quite cut the mustard compared to the previous barrage of tracks, the title track and album finale, The Way Of All Flesh, is a slow, drawn out affair that is a fitting enough way to round it out, if you exclude the six minutes of silence, and the hidden soundscape that warps up the final four minutes.

As good as The Way Of All Flesh is, even after repeated listens the material doesn't quite stick as well as that of From Mars To Sirius. If anything, The Way Of All Flesh is a grower and be that as it may, Gojira have come up a little short of topping From Mars To Sirius. This album won't disappoint you, but it might not be all that you hope for either.