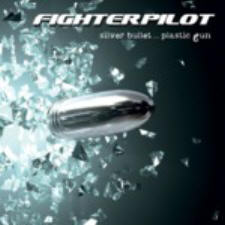 Adelaide - the City of Churches. In more recentish times, the City of Serial Killers may be more apt. It's a nice contrast, don't you think? If anything, Adelaide's always been a little quiet on the Aus rock front when compared to her East Coast compatriots. The last rock act I can think of to come from South Australia was the now “on hiatus” (a.k.a. defunct) The Superjesus. All that is about to change - please welcome Fighterpilot to centre strage. This five piece, who are vocalist Daniel Randell, guitarists Matt Williams and Simon Schell, bassist Josh Biggs and drummer Tim Bishop, are about to shake up the music biz on two fronts. Firstly, not only is their debut long player Silver Bullet ... Plastic Gun a little ripper of a rock album, they are making it available as a free download for a limited time from their website which they proclaim is an Australian first, and quite possibly rightly so as well.

Not one to waste time, Fighterpilot launch immediately into Animal. They blast out of the blocks with an assault of huge, hard rockin' riffs, tight lead work, thundering bass lines, solid rhythms and powerful, emotive vocals. It truly is a class opening track that really gets things off to the best possible start. Slotting things back a notch is the groove laced Fall To Your Knees, another kicker of a track with a slightly more sanitised Guns 'n' Roses like chorus - classic Gunners, not the current Axl Rose show version. These guys take bits of Audioslave, Stone Temple Pilots, Velvet Revolver and to a degree the aforementioned Guns 'n' Roses, and roll it all into one fire ball of hard rock 'n' roll. Still rockin' but showing off some different grooves is the excellent Four Rounds - check out the prog fused mid section that features some stellar lead work from Williams, whose work shines again during She Said.

The Same As You kicks along the lines of the album's opener and is sure to be a crowd pleaser whilst The World Can't Touch Me is a huge number and one of the album's highlights - even above the killer opening cut. Fighterpilot continue to show off their diversity as well as their top shelf ability to craft a fine ditty with the gentler Save Yourself as well as the slightly more open Wait A While, both of which pave the way for the groovier, rockier See You Next Tuesday. It must be said though that it's not all silver and gold with both Let It Go and Can't See The Light both falling short of the high watermark set by the rest of the album. In the final act of diversity, the band deliver a slow, dark closer in The Darkest Hour which picks up the slack of the previous couple of tracks.

Fighterpilot are quite possibly one of the brightest unknown rock acts from our fine country which has produced a number of top shelf acts over the years. No doubt that is about to change! Ultimately time will tell but Silver Bullet ... Plastic Gun is twelve bloody good reasons why these guys should be huge! Oh and for a limited time, the entire album is a free download from their website - so go support Aussie rock and spread the word.