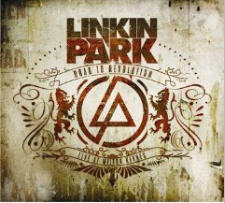 I'm sure that many saw Linkin Park's arrival on the scene, 2000's mega selling Hybrid Theory, as a flash example of yet “another nu-metal act”. Well, nine years and in excess of 50 million album sales later, and Linkin Park (who are vocalist Chester Bennington, vocalist/guitarist Mike Shinoda, guitarist Brad Delson, bassist David “Phoenix” Farrell, DJ/sampler Joe Hahn and drummer Rob Bourdon) are still going strong and they have the fan base to prove it. As their annual music festival Projekt Revolution made it's U.K. debut at the famed Milton Keynes Bowl on June 29 2008, the band put the show to tape and the result a few months later is the DVD/CD release, Road To Revolution.

With Linkin Park being the hugely successful band that they are, you'd expect a pretty slick production on the DVD and that's pretty much what you get, too. Milton Keynes Bowl is absolutely packed to the rafters as Linkin Park deliver a relatively energetic 85 minute show. The camera work covers every aspect of the show but whilst Bennington and Shinoda are animated characters on stage, it appears that Farrell and Delson are inanimate by comparison. With a stage the size of what they had to work with, surely there'd be a bit more excitement and movement from those not tied down to samplers and drums. That aside, the sextet belt out their “best-of” flavoured set that covers all three studio albums in a reasonably well balanced manner - One Step Closer, Numb, Breaking The Habit, Crawling, and a very gentle, sobering performance of Pushing Me Away with only Shinoda on keyboards backing Bennington - they are all here and many more. The set also features collaborator Jay-Z with the band on Numb/Encore and Jigga What/Faint, the first time that Jay-Z has performed with Linkin Park outside of the U.S.A.

The accompanying CD is simply the audio of the same show and as you'd expect, it's the same quality sound wise that really captures the band's performance well. If there was a complaint, it would be that the DVD is purely lacking in bonus features. Case in point being the recent Static-X live DVD/CD combo which saw the band's vast catalogue of video clips included as a bonus. Sure, it wouldn't be the primary reason for picking this up, but as a bonus, it would have been a treat for fans. Hell, anything would have been good.

Fans won't be complaining too much about this one - a well rounded setlist of hits that sounds and looks good. Sure the lack of extras might bum some out, but who really watches extra features all that often? Take it for what it is - Linkin Park live and enjoy it.