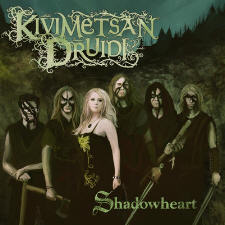 Middle of the road if nothing else

Although the genre’s influence has been around in one form or another for a number of years, it’s really only been in the last few years that the symphonic folk/death metal has established itself as a genre in its own right. And while there have been some truly interesting examples of aggressive death metal fused with traditional European folk (Such as Turisas, Finntroll and Moonsorrow), there are some that don’t quite work as well. In the case of Finnish (Kouvola based) act Kivimetsän Druidi (which is Finnish for Druid of the Stone Forest), they tend to fall more into the latter category with their debut full-length effort Shadowland.

The opening instrumental Northwind – Prelude is as you would imagine, simply a symphonic introduction to proceedings, and pretty much standard fare for the most part. It’s with Blacksmith that the six-piece act (Comprising of vocalist Leeni-Maria Hovila, guitarist/vocalist Joni Koskinen, guitarist Antti Rinkinen, keyboardist Antti Koskinen, bassist Simo Lehtonen and drummer Atte Marttinen) get the album officially underway, and in doing so shows both the band’s strength and weaknesses. In terms of aggression, Kivimetsän Druidi are surprisingly one of the heavier acts within the genre (Both in terms of harsh vocals and the black/death musical accompaniment), but it’s in the song writing, folk instrumentation and clean lead vocals where the band falls short. Blacksmith is a good song, but not altogether that memorable, while Hovila’s vocals are a little on the annoying side with her wailing dominating the mix, at the cost of the subtle folk influences hiding in the background.

For the remainder of the album, there’s not a huge amount of change within the formula shown in the opening track, with tracks such as Jäässä Varttunut (Grown Up Within Ice), Halls Of Shadowheart, The Tyrant and the lengthy Mustan Valtikan Aika (The Era Of The Black Scepter) the definite stand outs of a fairly unmemorable bunch of tunes.

Despite the overall disappointment of Shadowheart, there’s plenty of promise shown throughout the album’s eleven tracks. No doubt, it’s that promise that Kivimetsän Druidi will truly build upon with their second full-length effort. But for the time being, Shadowheart is only appealing to those who can’t get enough symphonic folk/death metal, regardless of whether it’s done well or not.