Time Waits For No Slave 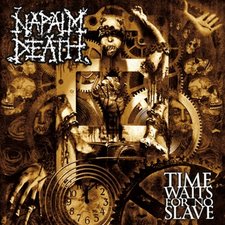 Where does one begin with Napalm Death? Their history is long, colourful and varied and to some extent, those adjectives can describe their vast discography as well. They laid the blueprint and set the standard high for grindcore with their first two efforts - the legendary Scum (1987) and From Enslavement To Obliteration (1988) - and throughout the course of the next decade and six studio albums, their output varied as they experimented with groove and tempo changes although their core remained true. But with 2000's Enemy Of The Music Business, the group returning to their relentless, grinding past with a string of outstanding releases that included 2002's Order Of The Leech, 2005's The Code Is Red...Long Live The Code and 2007's Smear Campaign. Now, you can add Time Waits For No Slave to that long and impressive list.

As you'd expect from these veterans of grind, the opening cut, Strong-Arm, wastes no time in confirming that Time Waits For No Slave is every bit the perfect follow on from Smear Campaign. Blasting beats, furious guitars and trading screams from vocalist Mark 'Barney' Greenway and guitarist Mitch Harris are the group's signature weapons of destruction and they are evident in full force from the get-go. The aural barrage continues with Diktat and the dynamic and groove laced Work To Rule showing that the quartet (rounded by with bassist Shane Embury and drummer Danny Herera) still know how to mix up song dynamics to maximum effect. On The Brink Of Extinction is a slower, more melodic (as far as melody and Napalm Death can go hand in hand) and ultimately more accessible when compared to blasting fury of the title track, Time Waits For No Slave, which features some haunting, dark vocal harmonies in between blast beats.

Life And Limb and Downbeat Clique might drop the pace down a bit, but both still maintain the intensity that only Napalm Death can deliver... the kind of intensity that feels like you're riding a jack hammer as it rattles your bones to the very core. Within seconds of Fallacy Dominion's opening chords, you know what to expect from the punk fuelled aggression that blasts from the speakers, whilst Passive Tense slows things down and, along with Larceny Of The Heart and Procrastination On The Empty Vessel, brings back more variety to shake things up and really keep things interesting. The run to the finishing line is a quick one with Feeling Redundant, A No-Sided Argument and De-evolution Ad Nauseum upping the intensity and the adrenaline levels in truth old school Napalm style.

Not much else can be said about Napalm Death these days when they keep delivering consistently brutal and strong releases one after another. Time Waits For No Slave is another in a seemingly endless line of top shelf releases from the masters of grind.