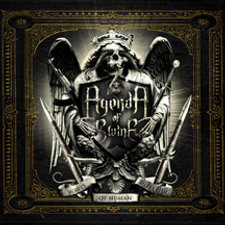 Released last year, Agenda Of Swine have more than satisfied this embracer of all things that hark back to yesteryear. Formed in 2006 (featuring members of hiatus status bands Benumb and Vulgar Pigeon) they soon hit the studio and, over a 12 month period, created the frenzied and angered Waves Of Human Suffering. An early clear highlight being vocalist Pete Pontikoff who spits forth his lyrics with a bile that few could muster, and few would embrace. It's loose, unrelenting, angrier than a horde of poked bears and therefore perfectly suited to the eclectic style that Agenda Of Swine do well.

Intro track Gethsename is a short chugging mood setter for the onslaught of Lost In Apathy and Stains Of Accountability. Both are fine examples of the erratic nature of the Agenda Of Swine song structure that often lurch from punk laced verses to double kick backed choruses to chugging old school breakdowns and the occasional lead break! It's not until Eradication Of The Seeds Of Purity though that we see a true deviation from the 'shock and awe' tactics via a brilliantly brooding atmosphere that creeps along, headed by spoken vocals and backed by howls of pain.

End Of All Ends is a brief, yet classically dirty, old school crossover track complete with an obvious, yet impassioned, chorus followed by the punked out verse diving into death/thrash riffing changes of Despised From Inception. Fragments Of Reason and Conditioned For Failure are eclectic maelstroms that jolt about like a music class full of violent ADD kids before the bass/drum intro of Devouring The Residual Bile sets the scene for the head stomping to come. Gang vocals and mosh pits litter this highlight track that ends with a melodic mid paced scale run outro. The album is capped off by Persecution, Ascension, Leave Nothing Standing (again a single track title), where Agenda Of Swine leave us with a thrashed out treat (think Dark Angel's Darkness Descends) that breaks down into a pit friendly section to savour.

Embodying all the anger of a violent street protest backed by a grinding/punk/HC/thrash metal soundtrack to fuel the flames of discontent, Agenda Of Swine are surely the guys at the front setting the tyres on fire ... approach with caution!