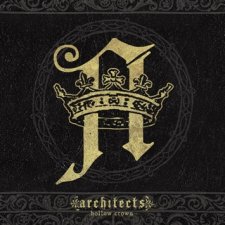 Fans be prepared for something different

After building up a reputation within the press through their two full-length efforts (2006's Nightmares and 2007's Ruin) and an E.P. (2008's split with Dead Swans), and laying waste to scores of gig goers through crushing performances alongside Bring Me The Horizon, Sikth and The Chariot, Brighton (U.K.) based metalcore outfit finally signed up with the mighty Century Media Records midway through 2008.

Much like their previous efforts, Hollow Crown will take many fans by surprise with its change of direction once again. But having said that, given the number of metalcore acts on today's scene, some will find that Architects' latest release holds very few genuine new twists and turns from what has already been heard before.

The first single/promotional video clip Early Grave instantly reveals a big Meshuggah influence with its off kilter rhythms and huge thick sound, but it's pretty much the only track on the album to really have this sound throughout. The song itself is a solid one, with Carter really sounding stronger and more comfortable within the group than before, especially with his addition of clean vocals around the three quarter mark.

From here on in, it's clear that Architects have opted to streamline their sound for the most part, with the album sticking predominately to the staple metalcore of most, but with an obvious technical edge filtering in throughout the band's heavier assault this time around. Prime examples can be heard in tracks such as Dethroned, Numbers Count For Nothing, We're All Alone, the fast paced One Of These Days and Dead March.

As mentioned earlier, Carter has definitely pushed his voice further than he ever has, with several of the track boasting clean vocals, while the parting effort on the album, Hollow Crown, is almost entirely sung in clean vocals. But despite the greater evidence of technical progression, the addition of clean vocals and a heavier production, Hollow Ground is ultimately a bit of a forgettable album. Sure there are some great songs, but as a whole, the album just doesn't stand out as anything exceptional or different from a number of other metalcore acts out there, which is a real shame.

If you're a fan of the current metalcore scene, then you'll definitely enjoy this. If on the other hand you're familiar with Architects' previous work, then be prepared to be a little disappointed with the direction the band have chosen to take on Hollow Crown.