Lullabies For The Dormant Mind 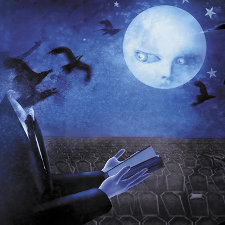 Without the hype, there is promise...

When Montreal (Quebec, Canada) based The Agonist released their debut album Once Only Imagined in 2007, it was accompanied by quite a bit of hype from Century Media Records, with the label clearly hinging their hopes on vocalist Alissa White-Gluz's good looks to help sell the band as a force to be reckoned with. But despite all the high hopes from the label, The Agonist's debut was nothing short of a huge letdown, with the band delivering an album that was anything but remarkable within the metalcore genre. Two years on and The Agonist (Comprising of White-Gluz, guitarist Danny Marino, bassist Chris Kells and drummer Simon McKay) are back with their relatively hype-free sophomore effort Lullabies For The Dormant Mind, and it's a definite improvement on their last effort.

The Swedish melodic death metal/metalcore formula of the band's debut is still very much in place on Lullabies For The Dormant Mind, so there's little in the way of any real surprises in that department. But in terms of overall song writing and diversity, The Agonist have well and truly improved in their two years away, with the opening track The Tempest (The Siren's Song; The Banshee's Cry) one of the better examples of where the band have not only toughened up their sound, but given just as much thought to the melodies, the back up harmonies and given the song plenty of tempo changes to keep things interesting throughout.

The follow up track ...And Their Eulogies Sang Me To Sleep is just as impressive as the opener with White-Gluz providing some distinctive clean vocal harmonies to counterbalance the more aggressive moments within the song, while the melodically inclined Thank You, Pain, the symphonic Birds Elope With The Sun, Waiting Out The Winter and the huge Martyr Art show off a completely new side to the band, but without alienating those who enjoy the heavier sound they are commonly recognised for.

Despite sounding a little out of place on the album, the classical based Swan Lake, Op. 20 - Scene, Act 2, #10 - Tchaikovsky (A Cappella) allows White-Gluz to showcase her vocal prowess on several levels, while The Sentient and the black metal tinged closer Chlorpromazine are by far the two heaviest and pummelling tracks the band have offered up to date.

It may take another album or two for The Agonist to really deliver on their promise to offer up that something special, but for the time being, Lullabies For The Dormant Mind is a rather enjoyable improvement on their debut, and a definite step in the right direction for the band.

More from Agonist, The