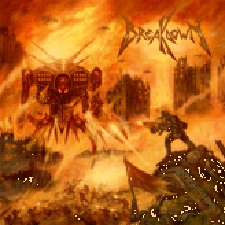 The time to kill starts now!

"And The Attack Doesn't Stop," shouts the three musketeers formally known as Breakdown (Leo (Guitar/Vocals), Danilo Warrior (Bass), and Edu Pinho (Drums)), who have brought from the dirty and violent trenches of the battle grounds Time To Kill. It's an LP engraved with eight tracks of pure thrashing entertainment with death metal growls and grunts to match.

Not only is “And The Attack Doesn't Stop,” a great introduction to an album but it brings fourth that momentum that metal is well known for. Having the adrenaline rush of the of the vocal chords shout directly at you, enthralls you instantly. Whereas the instrument proportion finishes the job - well crafted guitar riffs with break-through solos tagging right along leaving the drumming tactics all alone. But don't despair as those fast pacing tempo beats blast right on through wrapping up the tune and leading straight on into War. This one being for the real blood shredders, aiming for all the headbangers listening in; get ready to lose your mind. The absolute rush invades your ear drums bouncing off all the walls making your head a turn table going at 100MPH.

Having the personality you once knew at a much more advanced personality trait, a Mutent Personality, breaking you from the inside out. Bringing the album to a conclusion is the title track which in the end allows this album to have no weak spots whatsoever, offering a wide variety of heaviness and balances out all the musical bliss you look out for on an album as intense as this.