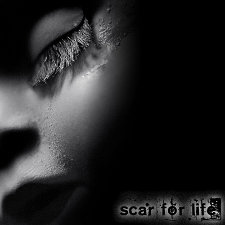 You will forever be scared for life

Scar For Life, not to be confused by another act named Scars Of Life, has been flooding the music scene with their presents lately and the recent airing of their music video of My Last Words, which right away struck a chord with similarities of Bullet For My Valentine’s Tears Don’t Fall. You would think a name like Scar For Life would be more metal relating which no doubt about it, they do posses these factors but it’s that mellower side of metal than the basic type with the growling and the screaming tactics that shake and rattle your body in every possible direction. Scar For Life brings out the side of metal you only see once in a blue moon.

When the roaring roughness of the ocean sea cries out with agony it reflects a shining essence against the moonlight skyline, releasing upon the waves a self-titled debut of effort that captures the sight and sound of the music exactly as it seems. The album sets off with a very dynamic song that states clearly the direction of the band. These melodic rock/metal stars shine brightly; having a lot of alternative rock attitude and a really catchy chorus. The fact that you can hear two voices behind the microphone (plus a female one that pops every now and then if I am not mistaken) really shows the pure talent. Kill The Past keeps that metaling rock and roll juice flowing bringing to mind a local Los Angeles act known only as Daybreak Ends which creates the same exact essence. The guitars and drum work is done sharp and clean keeping the music flowing fast and quick moving your head and body every second to every note played.

The Bleeding Gun and Insomnia go hand in hand with one another since the titles alone set the perfect scene for tragedy. The Bleeding Gun maintains that raw aggressive side of metal with screaming vocals popping right in grabbing a hold of you and slamming you into the ground while the Insomnia tune breaks through and barricades you, comforting you as the music you’re currently listening to destroys you from the inside out. Scar For Life is an act that will mess you up no matter which of the nine tracks you throw on and turn it up full blast. You will be going for a ride of your life leaving you breathing heavily saying "Scar For Life, is that what my life is now?"