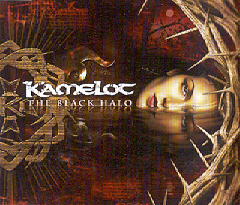 From strength to strength

I can honesty say that even though Floridian power metal band Kamelot had been established and releasing albums since 1994, I really didn't sit up and take notice until they recruited Norwegian vocalist Roy Khan (Ex-Conception) for 1999's The Fourth Legacy. Prior to that, Kamelot has failed to really impress me with anything new. Since then however, Kamelot have gone from strength to strength, with Karma (2001), and in particular Epica (2003) displaying more character and individualism than most within the power metal scene. But with so much progression within their sound, it's left a lingering doubt in followers mind as to whether Kamelot were up to the challenge of following up the highly acclaimed Epica.

Fans needn't worry, as the four-piece act (Consisting of vocalist Khan, guitarist Thomas Youngblood, bassist Glenn Barry and drummer Casey Grillo) has managed the impossible by producing their third masterpiece in a row. Picking up the conceptual storyline of Johann Wolfgang Von Goethe's Faustus once again (Which began on Epica, and deals with the immortal good verses evil tale), The Black Halo is Kamelot's most ambitious work to date, and also their darkest.

The album begins in glorious fashion with the mid paced epic March Of Mephisto. Along with the stunning harmony structures (Which is common place in Kamelot's work of late), the production (Handled once again by Sascha Paeth and Miro) is duly noted as by far Kamelot's best yet, emphasising every aspect of the musician's performances. The track also sees a couple of guest appearances, with Dimmu Borgir's Shagrath (Who plays the character Mephisto) adding his distinctive black metal growls (Without over shadowing Kamelot's own efforts). The other notable guest is Stratovarius keyboardist Jens Johansson, who again adds his touch, but without dominating proceedings. Taking on more tradition European standards, When The Lights Are Down is a lightning paced anthem that allows Grillo to stand out from behind the kit (Along with Johansson once again on the keyboards), while vocalist Simone Simons reprises her role from Epica on the melodic The Haunting (Somewhere In Time).

Adding a slightly heavier edge to the album, Youngblood's presence is felt on Soul Society (Which also features some subtle orchestration), Nothing Ever Dies, Moonlight, This Pain and the title track The Black Halo, while Abandoned shows that the ballads are every bit as strong song writing wise as the heavier numbers. The last of the albums highlights (Which is damn near every track) is the towering progressive/power metal number Memento Mori. Shagrath makes another short appearance, while Mari (Masqueraid) lends her impressive backing vocals throughout the choruses. At fourteen tracks long, most would assume that The Black Halo will include moments where Kamelot rely on filler material to hold up the album in places, but that couldn't be further from the truth.

The Black Halo is by far Kamelot's finest hour (Long album), and one that has set a new standard in the benchmark for which Kamelot released shall be hereby judged. Just where Kamelot go from here is anyone's guess, but for the time being, Kamelot can bask in the glory that's all of their own making.