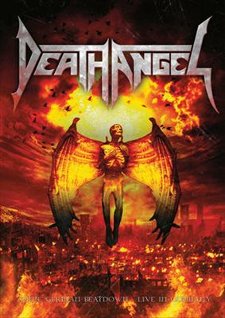 It seems, at least to this long time metal head, that now, Death Angel are starting to get some of the support, exposure and props that they were destined to get before they broke up after the release of their third album, Act III (1989). Since reforming initially in 2001, their fourth effort, 2004’s The Art Of Dying received a general warm response. But it would be 2008’s Killing Season that really gave the band’s momentum a huge kick along. Whilst we wait for a new album, the band have seen fit to keep that ball rolling with a live CD/DVD (or DVD/CD) release titled Sonic German Beatdown – Live In Germany.

As the name suggests, this live release contains a live show from Germany. But wait... there’s more! There are in fact two live shows - the Rock Hard Festival from 26 May 2007 and a full length set nearly a full year later from Adelsheim, Live Factory from 25 May 2008. The first set, given its date, is skewed towards both The Art Of Dying and Act III but not at the expense of the band’s earlier thrash-terpieces (1987’s Frolic Through The Park and 1986’s The Ultra Violence). Whilst only a stereo mix as opposed to true digital surround, the band’s wall of sound is tight and punishing with all the crisp highs and rumblings lows balanced throughout whilst what seems to be no end of cameras ensure every nuance of Death Angel live on stage is captured to the n-th degree. This 80minute set also makes up the CD component of this release as well.

Twelve months on, a new album, a new tour but back to the same country and this time the set is quite the bit different as you’d expect. This smaller more intimate club gig is another electric performance from the group but with the video masked with a grainy effect throughout and being only recorded in 4:3 as opposed to wide screen, it has more of a fancy multi camera bootleg feel to it. The stereo only mix is solid but Osegueda’s vocals sound sub par and scratchy at times (Buried Alive being a prime example). Interestingly enough, the track list for this show doesn’t match the disc with several tracks being listed out of order, and a couple not even listed as well. A tad sloppy for a professional release in my eyes. Rounding out the DVD component are the video clips to Dethroned (the uncensored version) and Thicker Than Blood which are reasonable inclusions.

The CD component has some pros and cons associated with its inclusion. Of course, it’s great to have a live CD of Death Angel that sounds as good as this one does, but it would have been nicer if it had been a show from the Killing Season tour, and not the now well dated The Art Of Dying era.

Death Angel fans will love finally having a live release available but it’s not perfect unfortunately. The 2007 show is fantastic through and through – visually, aurally and performance wise it’s spot on. The newer show is rougher overall and whilst that may appeal to some, I can’t help but feel the band deserve better, especially when things such as setlists can’t be printed correctly. That’s just poor quality control. But, fans of Death Angel, there’s plenty here to justify throwing down your hard earned cash – let’s not get carried away. It’s just not as good as it should have, or could have, been, for this reviewer.