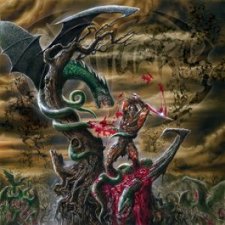 Xecutioner return with a more than worthy follow up

Legendary Floridian death metal act Obituary delivered a savage blow with their 2007 release Xecutioner’s Return. It was THE comeback album that the somewhat lacking Frozen In Time (2005) should have been. A couple of years on and with further substantial touring under their belt, the group (who are vocalist John Tardy, drummer brother Donald Tardy, guitarists Trevor Peres and Ralph Santolla, and bassist Frank Watkins) are truly a well oiled machine once more and their latest offering, Darkest Day, is testament to that.

Brief hollow sounding lead in aside, List Of Dead launches from the blocks with speed and Obituary’s unmistakeable and inimitable sound. The doom laden, sludge ridden groove of Blood To Give suggests that Darkest Day will strike a balance somewhere between the slower Frozen In Time material and the quicker Xecutioner’s Return era. Lost adds a little more weight to that argument and if earlier material is your thing with Obituary, consider Lost something from The End Complete or perhaps even the Cause Of Death eras. Either way, this is undeniably Obituary and utterly brilliant. If you don’t think so, then just listen to Outside My Head. Long standing fans should lap this up for sure. The band’s love of Celtic Frost pops up in the plodding Payback befofre the title track, Darkest Day, lives up to it’s name thanks to a brooding and lengthy intro that soon turns into one hell of a metal stomper in true Obituary style.

The likes of This Life may seem like familiar territory by this point, but that’s Obituary’s thing. They clearly have their own style and their own sound and what they do, they do well for the vast majority of the time. Fans of West’s dive bombing noise laden lead break style will again struggle with Santolla’s technical style much like they did with Murphy’s work on the brilliant Cause Of Death. Either way, there’s no denying Santolla’s brilliance as a part of the band, with the likes of the crushing See Me Now and the dynamic Fields Of Pain showing that there’s plenty of life and brutality left in the group yet. The blistering Violent Dreams is reminiscent of Words Of Evil (from the groups 1989 debut, Slowly We Rot) and is a welcome change of pace to change things up. Truth Be Told, a winner late in the piece, highlights just about everything that fans would associate with Obituary before the swinging vibe of Forces Realign brings a slightly slower vibe to the plate. But it’s the epic Left To Die – not to be confused with the classic Death track of the same number from 1988’s Leprosy – that is a clear case of saving the best til last.

Classic Obituary? Well, Darkest Day sure as hell sounds like it and all the right bits and pieces are there for it to head that way. Time will tell. In the meantime though, rest assured that these Tampa (Florida, U.S.A.) heavy weights have delivered another high calibre slab of death metal. Top shelf stuff indeed and a fantastic follow on to Xecutioner’s Return.