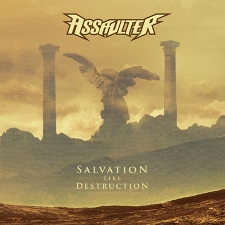 After a couple of well received demos and a sole E.P. release (2008’s ‘Subservience’), Central Coast (New South Wales, Australia) based blackened thrash metal act Assaulter have finally unleashed their debut full-length effort ‘Salvation Like Destruction’ on C.D. by Singapore’s Pulverised Records after having sold out the limited run of vinyl pressing’s on German label Iron Bonehead Productions in 2008.

Having previously spent some three years as a member of Melbourne based outfit Deströyer 666, there’s no escaping that vocalist/guitarist/bassist Simon Berserker’s vision of Assaulter bears a striking resemblance in sound and feel of his former outfit. But despite the similarities, Assualter’s debut effort (Which also features contributions from lead guitarist T. Hellfinder and drummer A.C.) more than stands out enough on its own right.

‘Talon And Teeth’ is a fast paced opener that rightfully sets the tone of the album with its raw and primitive production values and blackened thrash template. There’s more than a touch of old school Sodom influencing Assaulter’s overall sound, which isn’t a bad thing.

‘The Axiom Star’ slows down the aggressive with its mid-pacing, but stands out with its catchier chorus structure and the echoed effects on Berserker’s vocals, while ‘Glory Alone’ is a definite favourite with its riff heavy, epic/anthem like atmosphere throughout.

Assaulter delve a little into their own recent past on the second half of ‘Salvation Like Destruction’, with ‘Proselytiser’ and ‘Vengeance Whips’ both being given the re-recorded treatment after appearing on their 2006 demo ‘Omnipotent’, while ‘Between Gods And Men’ from 2005’s ‘Proselytiser’ is given a complete make-over, with all three tracks sounding all the more stronger and powerful in their newly re-recorded form.

Finishing up the album is ‘Awe Of Fire’, which is preceded by an impressive instrumental section before flowing into a crushing groove, filled with memorable riffs and a powerful performance from Berserker.

Assaulter’s debut effort is a great leap forward from their initial demo recordings. And while the production is a little on the weak side of things (In particular the lack of audible bass throughout the album), it’s a solid foundation for the band to build upon in time to come.