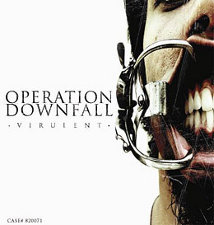 Will you come along for the ride?

Beep, Beep, Beep, Beep, beeps the heart monitor as you're laying on your back staring at the ceiling of a room decked all in white, tubes running in and out of you as you try to move but find yourself restrained, your body starts to shiver as a cold sweat forms on the top of your forehead you begin to couch and realize your coughing up your own blood it sickens you let out a scream then pure silence rings out as the one beeping noise has been deactivated and you find your body floating. Flying through the ceiling of the hospital and on through the clouds into the gates of heaven or shall I say hell? The guard explains briefly what happened to you giving you a summary of your life cycle and then tells you in the end that you just faced an Operation Downfall.

So your life was "Out of Nothing," which comes off Operation Downfall's debut "Virulent," a total of 15-tracks that tells the tale about a man and what he's about to face during his gut retching journey and it looks to me that it's just begun....

Divided into three various sessions each one goes into detail of expressing the story through the form of music which goes off into becoming a very raw energy with such emotion the intensity alone sets the whole environment it being surrounded by a pool of blood simple as that.

Each selection offered in each of the sessions indicates on its own formula of music, such as "Spiral Into Darkness," "Bred of Nothing," "Fate," and the main artist portraying the character himself entitled "Robert Paulsen," all of these tunes have gathered the right materials and bring out that instrumental matter of fast drive over the edge guitar riffing gut retching solos along with drum beatings to match.

Whereas the vocals attack the instruments with such force it makes the music that more enjoyable. "Virulent," in itself is a tale of lust, blood, and wisdom and the members of Operation Downfall have indeed brought all of that upon this album, the only thing left in the matter is having a listen. Will you be that listener?