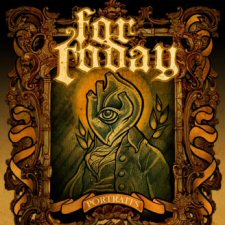 For all the hype surrounding Sioux City (Iowa, U.S.) act For Today’s debut full-length effort Ekklesia (The follow up to their independently released Your Moment, Your Life, Your Time E.P. from 2006), I was left somewhat under-whelmed by the whole affair. Vocally, Mattie Montgomery (ex-Besieged) sounded a little too at odds with the music, while the music itself was anything but remarkable for the most part.

Twelve months on, and For Today (who also comprise of guitarist/vocalist Ryan Leitru, guitarist Mike Reynolds, bassist Brandon Leitru and drummer David Morrison) are back with their sophomore effort Portraits, and the metalcore/melodic death metal act has undergone quite the transformation.

In almost every aspect of their song writing, For Today has improved in leaps and bounds on Portraits, including Montgomery’s growing confidence fronting the band and the musicians’ ability to vary the songs throughout the album work together at creating a far more engaging release than anything heard on their debut.

Lyrically, the band have dared to take things a step further too, with the ten tracks on the album focussing on a different character from the bible, and their respective roles in relation to God. And while the lyrical content tends to get a little heavy handed at times, there’s no denying the band have a passionate affiliation with their faith throughout Portraits.

Musically, there are plenty of moments throughout Portraits worthy of a mention. Despite running for a short forty-five seconds, the opener Immanuel (The Challenger) and the follow up track Saul of Tarsus (The Messenger) show off the two distinctly different sides of the band, with the former a slower paced and lumbering sledge of a track, while the latter quickens up the pace, with Montgomery switching from guttural growls and the odd clean line to great effect.

The metalcore based Immanuel (The Redeemer) is a definite stand out with Advent vocalist Joe Musten help to add a cool hardcore bark against Montgomery’s growls, while Between the Buried and Me guitarist Dustie Waring delivers some great solo work throughout the gentle instrumental Benedictus (Song of Zechariah).

The other notable stand out is the closing effort Talmidim (The Servants), which is by far the most melodic effort on the album with its prominent clean vocals and harmony vocal backing from My Epic.

Although a little heavy handed on the spiritual side of things lyrically, and perhaps a touch repetitive in places, Portraits is definitely a marked improvement over Ekklesia, and that’s enough to earn For Today a little more attention than before for this reviewer.