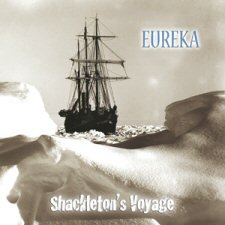 A relaxing motive has arrived.....

Shackleton's Voyage is the fourth album by progressive folk rock artist Eureka a side project by Frank Bossert in 1997. Bossert has been the main singer/guitarist/bassist in a number of Hamburg rock bands, before moving to the North Sea area of Husum. He later built his own studio and released numerous albums here and there but that was then and this is now, and now "Shackleton's Voyage," this album is one you got to listen too.

You receive 15-tracks of smooth modern day rock n roll music that releases this progressive but aggressive tone of attitude. The instrumentals create this relaxing feeling that never seems to fade away.The guitars play off creating non-stop riffs with fun overlapping drum beats that bounce off one another.

Some tracks that tend to stick out include "Icebound," "Into the Lifeboats," and "The Rescue," which all present themselves in an upbeat and rather catchy motive. Sending out this everlasting music that makes that rock n’ roll vibe re-enter itself over and over again.