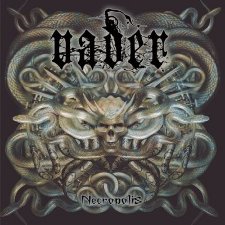 It’s hard to think of a more enduring icon of death metal than Poland’s Vader – a band who have not only been around for over 25 years but are also widely credited as being the first extreme metal band to emerge from behind the Iron Curtain. It’s an impressive résumé to be sure and with Necropolis, their ninth full length release, Vader demonstrate that they have no intention of slowing down any time soon.

Vader’s tremolo-picked blasting style is a long standing staple of the death metal genre but Necropolis sees them reign in their firmly established and trademarked blasting style for a more subdued and crawling style of death metal though rest assured there is still plenty of blasting as well. The material is still clearly recognisable as that of Vader, thanks largely to Piotr Wiwczarek (the only founding member of the band remaining) and his instantly recognisable vocal style and guitar work, but the scales have been tipped to favour a chugging, mid paced approach rather than the all out assault that we have come to expect from the band. It’s a side of Vader that I’ve always wished to see more of and songs like the epically long (by their standards anyway) closing track, amongst many others, demonstrate that the band still has some tricks up its sleeve and is able to keep fans on their toes by taking a well worn formula and changing it up just enough to keep things interesting.

In sticking with convention, Necropolis clocks in at just over 33 minutes which would likely be considered too short for most bands with 11 songs on the bill but for Vader it is not only the norm but is also completely appropriate. The vast majority of the songs on offer fail to stretch to the three minute mark but don’t feel rushed in the slightest, mainly due to the fact that Vader’s songs tend to focus on a couple of central ideas and rarely venture off into unexpected territory. The short track lengths allow Vader to get their ideas out there and then finish up before they have had a chance to stretch on for too long. It’s short, sharp and effective.

Interestingly Necropolis sees Vader take some small stabs at the atmospheric with songs like The Seal and Summoning the Future, a spoken word piece. I appreciate Vader trying something different but at the same time I’m not convinced that these tracks are all that effective or warranted inclusion. For my money they don’t really add anything much to the mix and in some ways actually break the flow and continuity of the rest of the album.

New to the fold this time around is Vogg who replaces long standing member Mauser on guitars and while I have to be completely honest and say that I can’t really notice the difference between the two, it’s probably as much a compliment as anything else because the musicianship is as tight as ever and retains that instantly recognisable Vader sound.

What Necropolis brings to the table is a mixture of the old Vader we all know with enough of a new spin to keep things interesting and is ultimately an album that will appeal to both existing fans and new listeners alike. Is it their best release? Perhaps not but it is damn good and is the best thing I’ve heard them put out for quite a while.