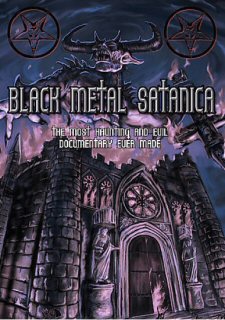 Much like that of the subject matter it captures, the landscape of the heavy metal documentary is starting to become just as common and overpopulated. Heavy metal is a broad subject to tackle but documentaries such as Metal: A Headbanger’s Journey and, more recently, Heavy Metal in Baghdad and Anvil: The Story of Avil were successful ventures through their ability to explain their goals from the outset and stick to them, providing not only valuable information but also genuine entertainment along the way. Unfortunately Black Metal Satanica does not continue the trend and high standard set by those documentaries.

Black Metal Satanica attempts to explore two areas: The beginnings of black metal (by way of the Scandinavian scene) and the philosophies of those who play the music. It’s a reasonable, if unoriginal, idea but poor pacing and a lack of any new information or perspectives make the documentary a waste for anybody that even remotely knows anything about the black metal scene.

The first 30 minutes or so are devoted to the beginnings of the black metal scene and unsurprisingly focuses on the myriad murders, church burnings and grave desecrations that marked the turning point of black metal from that of an underground genre into the worldwide entity that it is now via the media coverage these acts attracted. While the topic itself is rather interesting the documentary fails to spend enough time with the subject and doesn’t delve deep enough into it, leaving out or inadequately exploring topics I would have thought to be of high importance. Particularly disappointing is that the information presented is neither new nor revelatory for anyone who has been around the block a few times. I suppose people who are unknowledgeable about the history of black metal may find something of interest in this portion of the documentary but I suspect that they too would feel somewhat underwhelmed and unfulfilled by the information that is presented.

The remainder of the documentary is primarily filled with interviews with members from a variety of bands with topics ranging from Satanism to Christian Black Metal and everything in between. This is where the real meat of the documentary exists but it too tends to be rather light on and only a couple of the interviewees provide anything of any real importance. Many of the people interviewed come across as egotistical buffoons and appear to have had their interviews edited to help that impression along. The only person that I thought consistently provided noteworthy contributions was Watain vocalist Erik Danielsson who, while softly spoken and somewhat withdrawn, provided articulate and thoughtful perspectives on philosophy, religion, and the scene in general.

Perhaps most disappointing of all is the array of artists and bands that were interviewed for the documentary. I like to consider myself well versed in the black metal genre (hey, who knows, I may well not be) but with the exception of the relatively high profile Watain and Shining I had no idea who the other bands were that were interviewed (Mordichrist, Vreid, Rimsfrost and Ondskapt). Why the filmmakers chose these bands is beyond me. Surely it would have been more effective if they’d actually interviewed people that were pivotal during those formative years and could provide the viewer with something more than the perspectives of a group of artists that no one has ever heard of or cares about.

It isn’t all bad though as there were some genuinely funny moments, all of which were unintentional I’m sure. One part in particular that I enjoyed immensely was when Shining vocalist, Niklas Olsson, is articulating that the band’s purpose is to bring hurt and misery to the world while Van Halen’s “Dreams” is playing over the PA in the background of the venue he is being interviewed in. The irony was delicious.

Black Metal Satanica is a disappointing and rather shallow look at the black metal genre. If for some reason people remember this documentary in the years to come they will not remember it as a source of information but rather as an opportunity squandered.